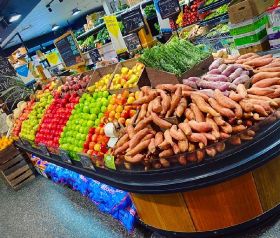 Australia’s leading consumer and advocacy group, Choice, has revealed the results of its supermarket survey.

Over 3,100 supermarket shoppers were surveyed, with questions ranging from how happy customers are with their supermarket's approach, and which supermarket offers the best online shopping experience.

“Although online grocery shopping is on the rise,” the report begins, “most people still prefer to shop in the bricks-and-mortar branches of supermarkets – mainly because they like to check the quality of fresh produce (like fruit, vegetables, meat and fish) before they buy.

“It's easier to browse and compare different products in-store, according to our survey respondents,” Choice revealed.

Supermarket giants Coles and Woolworths dominate almost 67.5 cent of Australia's grocery market. But while this duopoly dominates in terms of the number of stores and geographical distribution, the sheer presence and convenience did not translate into a more satisfied in-store customer.

“Our survey results show that when it comes to shopping in-store, South Australia-based Foodland (82 per cent) was the favourite supermarket, closely followed by South Australia and Queensland-based Drakes (79 per cent) and New South Wales-based Harris Farm Markets (78 per cent),” Choice reported.

“These chains received the highest overall scores for supermarket satisfaction. They also rated higher than their competitors across various criteria including range of products and brands available, and availability of locally produced foods.”

Shoppers rated Aldi highest in terms of value for money, while Costco rated well for value, too. The aforementioned Harris Farm Markets was a clear winner when it comes to quality of fresh produce, according to the survey.

In terms of the performance of Coles and Woolworths, the latter rated above average for store appearance and layout, clarity of unit pricing signage and the amount and availability of specials and discounts.

Both Coles and Woolworths rated above average for availability of preferred type of checkout, range of products and brands available, and ease of using trolleys and baskets.

But the only criterion the two giants rated best for in this survey (on par with Foodland) was their opening hours – they rate lower than at least some of their competitors on all other criteria.

A total 3,182 ‘Voice Your Choice’ members across Australia took part in the survey, which Choice conducted in February and March 2021.

The overall satisfaction score did improve for both Coles and Woolworths this year, despite still being rated as amongst the lowest of the pack.

Ratings for Woolworths and Coles have also increased for aspects regarding products (e.g. the range of products and brands available, availability of locally produced food, quality of own brand, quality of fresh produce), according to the survey.

Despite still being one of the more highly rated supermarkets, Harris Farm Markets had a drop in overall satisfaction score, and decreased ratings for amount and availability of specials and discounts and stock turnover.