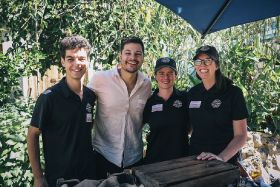 The Southern Forests Food Council (SFFC) has announced the West Australian state government will no longer fund its programme, ending a relationship that lasted nine years.

The food council was founded in 2010 by a group of passionate local producers who recognised the wealth and abundance of produce grown in the region made it perfect for major food production and agritourism.

In 2018, the SFFC secured a further A$1.075m in state government funding to support the council’s ongoing activities in developing economic opportunities for the region for a further three years.

The funding period concluded on 30 June 2021, with the food council saying it gratefully appreciated the nine years of state government investment in the organisation.

SFFC also acknowledged the bi-partisan support it received from all three ministers for agriculture throughout the period: Terry Redman, Ken Baston, and Alannah MacTiernan.

“The consistent strong level of ministerial support and advocacy provided over the years has been heartening for the local agriculture sector and the community,” said Kieran Kinsella, chair of SFFC.

“It has enabled the food council to provide a key link that has facilitated the flow of information, opportunities, and communication between government, industry, and growers.”

Kinsella also highlighted the outcomes of the 'Royalties for Regions' investment, adding; “they have undoubtedly resulted in a genuinely unified and energised regional community that proudly and significantly produces some of the state’s best produce.”

The Shire of Manjimup remains committed to the project, announcing it would contribute an annual financial contribution over the next three years and a five-year lease of a Shire-owned facility that will be the new home of the food council.

One of the key achievements of the food council over the last decade was the creation of the ‘Genuinely Southern Forests’ brand, which was launched in 2013 to represent the premium produce, producers, and region. The brand now has achieved 50 per cent recognition among Perth consumers and is well supported by local growers producing over 87,000 tonnes of produce each season.

Kinsella said the food council has proven its flexibility over the last decade. “We have been working hard to get our core structure right to allow us to smoothly transition from being reliant on state government funding, but like many businesses in the current climate we have plenty of challenges ahead to ensure the ongoing viability of our organisation.

“We are calling upon the growers and all those involved in the local ag sector to continue their support for the organisation to allow us to continue to deliver outcomes for the region,” added Kinsella.