All-new cluster separating machine for cherries, which eliminates product damage, will be showcased at Fruit Attraction 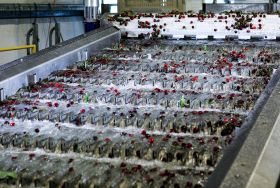 Tomra Fresh Food has announced that it will unveil its new Cascade Singulator for cherry singulation at Fruit Attraction in October.

The group said that its New Zealand-based team had designed and developed a new machine for singulation from cherry clusters with a gentle carrying method and superior cluster separation.

"The traditional cluster-cutting of stems from grouped cherries exposes the fruit to a series of tines, blades, and blade guards, all hard contact points," Tomra noted. "This can cause pitting damage in a significant percentage of the fruit.

"This problem is especially troublesome with more delicate and lighter-skinned cherries, such as Rainiers, but affects all varieties. Consequently this may lower the value grade of the crop, thereby making it unable to meet certain market requirements because their shelf-life is shortened.

"Until now, this loss of potential product revenue has seemed unavoidable. But the launch of Tomra Fresh Food's all-new Cascade Singulator solves this age-old problem."

Tomra also aimed to provide a technology that could be easy to operate while also reducing the on-going costs.

"By consulting with cherry industry experts around the world, we sought a solution that ensured gentle handling and respected the value of each individual cherry," she explained.

"This new technology not only will improve the quality of the separation while guaranteeing increased reliability and consistency in the fruit quality, but will also ensure reduced operational hours and maintenance costs; our customers will not need to hire highly skilled people to continuously adjust the singulator during the cherry season based on the different varieties, while also reducing the operational hours needed to replace blades and bearings during the maintenance procedures. Tomra Fresh Food made sure to take care of everything for its customers’ peace of mind.”

According to Tomra, the design of the Cascade Singulator's separation system removes the need for rotating blades and protective guards.

Traditional cluster cutters push cherries at speed to get clusters to the blades, significantly increasing the risk of pitting and bruising. The Cascade Singulator reduces the velocity of the cherries by using a non-motorised water system that decelerates the water flow between each bank of separation.

For a higher separation quality, the Cascade Singulator aligns the cluster's centre to achieve a clean and even separation without the risk of tearing the cherries, Tomra noted, improving separation location nearer the knuckle where two cherries join.