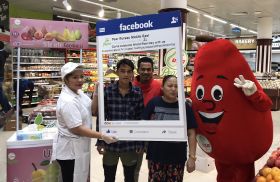 World Pear Day celebrations in the UAE in 2019

US-based Pear Bureau Northwest is launching the sixth edition of its World Pear Day on 4 December.

The event gives consumers around the world the opportunity to celebrate pears through a 24-hour social media activation.

Pear lovers will be able to connect through the USA Pears social media channels and by using the #WorldPearDay hashtag.

Celebrations will begin on Twitter in the earliest time zones – New Zealand and Taiwan – then continue through Asian markets and into India, Saudi Arabia and the UAE, before arriving in the Western Hemisphere.

“As we kick off our sixth World Pear Day, momentum continues to build around this celebration of the sweet and juicy pear,” said Kevin Moffitt, president and chief executive of Pear Bureau Northwest.

“World Pear Day elevates the beauty and versatility of this popular fruit with social media postings of people enjoying pears all around the world.”

“It has proven to be such a successful campaign that the Pear Bureau has used it to kick-start promotional efforts in many export markets,” said Jeff Correa, international marketing director of Pear Bureau Northwest.