Following a decline in production and exports during 2009, New Zealand's kiwifruit business has remained steady this year 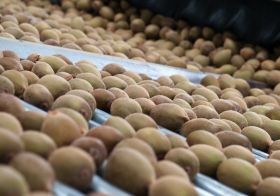 New Zealand kiwifruit production fell to an estimated 380,000 tonnes in 2009, down 4 per cent on the previous year and translating into a 4.2 per cent decline in exports to 361,066 tonnes, according to figures published in a new report by the US Department of Agriculture.

Production in 2010, however, is set to be slightly under the previous year's figure at 379,050 tonnes, the report said, with a cold spring and extended drought in the main producing regions expected to negatively impact on yields.

Exports for 2010 are forecast to be largely stable, although down marginally, at 360,000 tonnes.

"Eating quality of the crop is reportedly good but there is a higher than average proportion of misshapen fruit," the report stated.

A drought in the Waikato, Northland and Auckland regions, which also affected the Bay of Plenty, also had a negative impact on crop yields and fruit quality, the report said.

Out of a total of 13,250ha of kiwifruit production in New Zealand, 2,615ha are reportedly planted with Hort16A (marketed as Zespri Gold), which the USDA said was expected to produce between 28m and 30m trays by 2014.

The report added that New Zealand kiwifruit marketer Zespri could find it more difficult to source volumes offshore this year following "quite severe" problems with disease encountered in Italy, France and Chile.

"Zespri has been sourcing kiwifruit from various markets around the work `sic` in order to maintain continuity of its supply to its key customers," the report observed. "In 2009, approximately 9.8m trays, a 13 per cent increase from the previous year, were sourced from offshore compared to 98.5m trays produced domestically."