Exporters, importers and retailers aim to increase awareness of offering after strong start to campaign 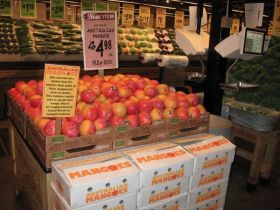 Australian mango suppliers plan to ship a wider range of varieties to the US this season, as they look to increase consumer awareness of their offerings.

Australian-grown Honey Gold, Kensington Pride and R2E2s will all enter the North American market this season, with programmes kicking-off with the arrival of 6,000 cartons earlier this week, according to ABC Rural.

Michael Daysh from the Northern Territory Department of Primary Industry travelled to Texas to inspect the arrivals at retail level. Daysh said the fruit made an immediate impact.

“The produce manager here says his consumers are asking for them and when they're out of stock, people in his store are looking for them, which is exactly where we want to be,” Daysh told ABC Rural.

"Consumers over here are interested and importers are keen to get more volumes next season. They're disappointed that they didn't get as many mangoes from Australia as they had hoped this season, so we could have sold more."

After the success of the first full season into the US in 2015, Australian Mango Industry Association chairman, Gavin Scurr, told ABC Rural that Australia could export up to 1m trays of mangoes to the US by 2020.

Daysh agreed there is a huge potential for the offering but added export programmes need to be complimented by strong consumer education programmes, particularly as new varieties are being introduced.

“At a consumer level I think they're interested in the different appearances (between the mango varieties), but they're finding them all very sweet relative to the fruit from other countries," Daysh said. “So while the trade and the importers are talking about the difference (in varieties), I don't think it's resonating with consumers just yet.

"They're talking about potentially positioning Australian mangoes as being 'full-flavoured' and 'tree-ripened', marketing things like that, to talk about them having a bigger and better flavour than fruit from other countries."