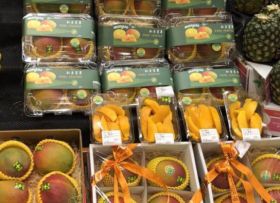 Leading Peruvian supplier Camposol has teamed up with Dole China to introduce a line of Kent mangoes to the Chinese market.

Branded under the name Peruvian Flame Mangoes, the fruit entered the Asian nation in the lead-up to Chinese New Year celebrations. Dole is distributing the fruit through offline retail channels such as Olé and other high-end supermarket chains in China, with initial consumer reactions proving favourable.

“At in-store sampling sessions, Olé customers offered rave reviews of the fruit as it became one of their new favourite imported products for the New Year tradition of gifting fruit to friends and family,” a release from Camposol said.

The fruit is grown in the north west region of Piura, which accounts for 75 per cent of Peru’s mango plantation by area.

Camposol described the fruit as “egg-shaped” and medium to large in size, with an average weight of 512g per piece.

“The flesh is firm and the sweetness level very high — and excellent complement to the sweetness of reuniting with loved ones during the holidays,” the release added.