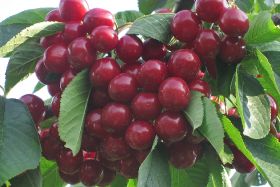 As Australia’s early-season cherry harvest gets underway, hopes are high for a record crop.

“The forecast at the moment depends on how bullish you want to be … we would have to be starting this year at a baseline of 20 per cent higher than 15,000 tonnes, so it will be about 18,000 tonnes," Eastlake told ABC News.

“Assuming we don't have any adverse weather events come through, I would be reasonably confident we hit that mark."

Cherry growers in New South Wales are optimistic about crop forecasts, despite the state being in the grips of drought.

Water storage in the key production hub surrounding the township of Young is down, but many don’t foresee this as a wholesale problem.

“It means we just have to manage our water supply well,” Fiona Hall, managing director of Caernarvon Cherry Co, told Asiafruit. “Good management will mean there will be no impact on the crop as we hope for more rain through early summer.”

The dry spell, coupled with a warm winter, resulted in a later blossom in New South Wales, which has seen a later start to harvest for some growers.

Further south in Victoria, growers are reporting an above average fruit set, although some areas were affected by an early frost at budbreak. This has been compensated by a better than average fruit set on other varieties.

Michael Rouget, managing director of Victorian-based grower-packer-exporter Koala Cherries, said he was expecting a “normal crop to slightly above average" on his orchards.

Having secured significant market access improvements in January this year, the upcoming 2018/19 campaign will see mainland cherry growers send fruit directly to China via airfreight for the first time. However, it will be with an eye on laying the foundations for what the industry hopes will develop into a lucrative market.

“It is a positive step forward. People are optimistic but cautious given this is new territory for mainland cherry producers in Australia,” Rouget said. “I think this season most growers will trial shipments through this pathway but do it cautiously.”

The new protocol with China requires all mainland cherries grown outside recognised pest free areas to undergo methyl bromide treatment prior to export.

Hugh Molloy of Antico International says an adherence to high-quality will be crucial when it comes to developing market share in China.

“There is specific and unique demand for Australian supply if we can deliver consistent high quality, firm, sweet fruit,” Molloy told Asiafruit. “If this is established over November and December, the sales draw should then flow on into the Tasmanian supply window, which this year is perfectly suited to and timed for the Chinese New Year gifting period.”