Zespri refuses to rush through red 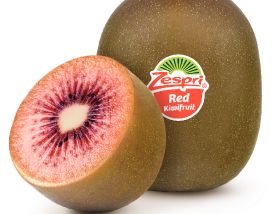 Zespri has made no secret of its desire to expand its varietal portfolio.

So when market testing of Zespri Red Kiwifruit took place in Singapore and New Zealand this year, the question was immediately asked: is the world’s most recognisable kiwifruit brand set to add a third colour to its line-up?

Zespri’s quest for a red offering looked to be well on track in early 2010 when it was running advanced pre-commercial trials with a cultivar from its ‘first generation’ red breeding programme. Its optimism, along with that of its breeding partner Plant & Food Research, quickly turned to despair when Psa-V arrived on New Zealand shores later that year, wiping out 80 per cent of these first-generation cultivars.

“The breeders at Plant & Food took what was left behind and used these cultivars to start the next generation of red development,” explained Zespri’s new cultivar innovation manager, Bryan Parkes.

“At the moment we have three red cultivars from this second generation, one of them more advanced by a couple of years. We’ve used fruit from this particular cultivar to run the trials in New Zealand and Singapore this year.”

While early signs are positive, Parkes refused to guarantee the cultivar recently on trial is certain to be commercialised.

“The answer will be based on the data we collect, which we’re still in the process of collecting,” Parkes tells Asiafruit. “The answer might very well be ‘this [cultivar] doesn’t make sense’ and we choose to pursue a red cultivar from the third generation currently coming down the pipeline.”

The first centres around the fruit’s high susceptibility to Psa. Given that the parents of Zespri’s second generation cultivars survived the Psa endemic that swept through New Zealand earlier this decade, the signs look positive on this front.

The second challenge is around fruit sizing, with many red cultivars cropping on the smaller side of what is generally expected by growers and consumers. Parkes says breeders have found methods to consistently produce a 100g piece of fruit, which consumer research suggests is the desired average weight of a kiwifruit.

The final piece of the puzzle relates to the fruit’s storage.

“We’ve reached a point where the storage life of our red kiwifruit looks to be sufficient. It’s shorter than what we’d ultimately like but it’s sufficient. The question now is ‘how long of a sales window can we get with the cultivars we have?’ That’s what we’re working on at the moment. We don’t quite know.”

With this in mind, Parkes said Zespri will ensure it has the right cultivar before commencing a commercial red programme.

“We’re still learning how to drive the car before we release it for production,” Parkes said. “We’ll collect the data from the recent market testing and see how it stacks up.

“There’s no doubt everyone wants to see a red added to our mix, but nobody wants one that fails.”

This is an extract from an article that appeared in Asiafruit June.