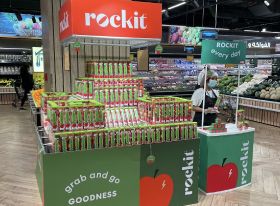 Sampling at a Lulu store in Dubai

A cross-channel marketing campaign has boosted Rockit apple sales in the Middle East.

Launched in late August, the campaign was themed around the back-to-school period.

“During our busiest month, from 6-30 September, sales in the region rocketed by 69 per cent when compared to the same period last year,” said Mark Pay, GM global sales at Rockit Global, the company behind the snack sized apple offering.

“We couldn’t be happier with the result, and with the knowledge that thousands of new Rockit customers were able to experience our delicious, nutritious fruit for the first time.”

New Zealand-based Rockit Global partnered with agencies Amplify and Apshar on the ground in the Middle East to deliver point of sale displays in 56 stores.

Sampling took place in 30 key stores, with teams handing out more than 14,000 apples to captivated customers.

“Obviously we were working around the challenges and limitations shaped by Covid-19 restrictions with strict protocols developed and adhered to,” said Pay. “That meant each gifted apple was housed in its own single serve sample box.”

A back-to-school themed landing page on the Rockit website had more than 7,000 hits, while overall web sessions increased by 87 per cent.

“Our digital marketing efforts were also rewarded, with thousands of new social followers to our Instagram page and thousands of new newsletter subscribers in the region,” said Pay. “Our kids’ colouring competition was downloaded 25,000 times. It’s been exciting to see the growth happen in real time over the course of the campaign.”

The MENA (Middle East North Africa) region has developed into a key market for Rockit Global, with its fruit sold across the UAE, Saudi Arabia, Kuwait, Bahrain and Qatar.

Pay said the company plans to continue expanding the presence for Rockit apples in the region through relationships with retailers and importers.

“The world is changing fast, so our efforts are concentrated on both online and offline stores,” explained Pay. “We’ll be pursuing new partnerships through 2021 and 2022, given the success we’ve already seen to date through leading fruit retailers including Lulu Supermarkets, Kibsons and Spinneys.”