Glyphosate renewal ‘a relief’ for growers 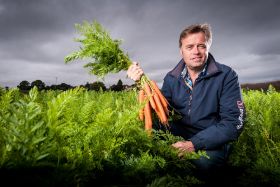 Like many farmers and growers I welcomed the news of the reauthorisation of glyphosate with a feeling of relief. Like many, I had watched with growing concern as the process became increasing political and the science and evidence became increasingly marginalised. Finally, common sense has prevailed, although it is disappointing the reauthorisation is only for five years.

I’m a large-scale carrot grower in the north east of England and the loss of glyphosate would have had major implications for my business. Couch grass is a major problem for growers like me. If it gets into the crop, it can take over and impact on the size of the harvest. You can’t machine harvest field vegetables if there’s a lot of couch grass in the field because it simply clogs up the machinery. Glyphosate plays a key role in helping control couch grass on my farm and there are no alternatives that do the job as well.

Glyphosate also plays a key role in controlling black grass, which is a damaging weed in arable crops. The relevance of this to a business that grows carrots may not be immediately obvious. But straw plays an important role in protecting carrots that grow over the winter and if I use straw containing black grass seeds on carrot fields, the resulting problems will have a serious impact on the carrot growing part of my business.

Farmers like me take great pride in producing high-quality crops while working to maintain and enhance the natural environment. Glyphosate means I use fewer herbicides on my farm. If it wasn’t available, I’d be faced with having to use less effective alternatives more frequently or using ploughing as a means to control weeds. So glyphosate helps to protect soil – the bedrock of any successful farm business – and reduce my farm’s greenhouse gas emissions.

Glyphosate has been used safely for 40 years. The overwhelming weight of science and evidence shows it poses no risk to human health when used properly. This is a view endorsed by both the European Food Safety Authority (EFSA) and the European Chemicals Agency (ECHA), the EU’s two leading independent regulatory bodies, as well as regulators in the United States, Canada, Australia, New Zealand and Germany, among others. A large long-term study into the use of glyphosate by farm workers in the United States, carried out over 24 years, also recently concluded it does not cause cancer.

Farmers and growers like me need a consistent long-term approach to regulation, based on science and evidence, which allows us to plan with certainty. It is vital that farmers and growers continue to explain the safety of glyphosate and its importance to farming and the environment, and that, as we leave the EU, UK politicians continue to make decisions like this based on real-world risk and the best available science and evidence – which shows that glyphosate is safe.

Guy Poskitt is a root vegetable grower in Yorkshire, producing more than 50,000 tonnes of carrots each year, as well as various other produce such as pumpkins, potatoes, swedes and parsnips.