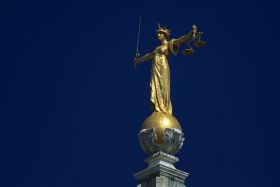 Statue of Justice on top of the Old Bailey (Photo: Ronnie Macdonald, Flickr)

One of Britain’s most notorious drugs barons, who smuggled cocaine worth £5 million in consignments of watermelons and pomegranates, has been jailed for more than 17 years.

Kevin Hanley, 52, who was considered the “top, top man” in the drug world and who previously traded on New Covent Garden Market (NCGM), was also the brains behind plots to deal kilos of cannabis and amphetamines and launder millions of pounds in cash, a court heard.

Hanley's girlfriend, Chrysi Minadaki, was also jailed at the Old Bailey (w/c 29 September) this week for 17 years for her role in the drug smuggling and money laundering, while Hanley’s right-hand man, John Fowler, received 16 years after being tried in law for the same offences.

According to the Press Association (PA), the court heard that Fowler’s fruit and vegetable business - which NCGM confirmed had been based at the south London wholesale market - was used as a front to bring the drugs into Britain via Greece.

Minadaki provided the lorries and the fruit as cover for the drug smuggling, while there were also plans to use strawberries, cauliflower and broccoli deliveries as cover when the police foiled the gang’s plot, the court heard.

Fowler traded at NCGM under the business name PCC (2009). This business was dissolved in April 2014, after a winding-up order was made in October 2012, according to records held on Companies House. The registrar of companies also records Kevin Hanley as being appointed as a director at the business in 2011.

A spokesperson for NCGM said that PCC had ceased trading at the market for some time before its eventual dissolution.

According to PA, the court heard that Hanley had been the key lieutenant of Brian Brendan Wright, known as the 'Milkman' because "he always delivered", who is serving a 30-year jail sentence.

Hanley was jailed for 15 years alongside his mentor in 2001. But within months of his release licence expiring in 2010, he went back to his criminal ways, the court heard.