Why frozen is on a hot streak

Retail expert and new FPJ columnist Bryan Roberts explores the trends behind a surge in demand for frozen produce, from berry breakfast toppers to avocado chunks 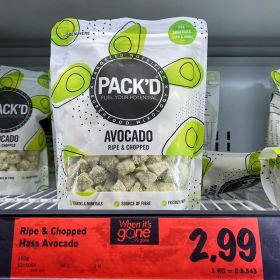 The pandemic has helped sales of frozen avocado chunks

I’ve never given frozen food a huge amount of consideration as an analyst or a consumer. Partly because I don’t think I’ve counted any specialist frozen food suppliers or retailers as a client in the past, but mainly because I’ve never owned a freezer. Instead, I’ve always had one of those shoebox-sized freezer compartments at the top of the fridge which have never contained anything other than ice-cubes and an emergency stash of fish fingers and oven chips.

This lack of consideration has changed recently, however, when I began working nights on frozen in the supermarket where I’ve been temping since the big Covid-related recruitment drive of March 2020. The bulk of what I’ve been filling (and dropping) has been the classic frozen categories such as fish, vegetables, chips and ice cream. One other notable area of growth has been vegan and meat-free, which has seen a doubling of frozen space over the last year.

I work in quite a small store, so the frozen section isn’t that big. As an obvious consequence, the range is fairly narrow – there is just one bay that houses frozen fruit, and one and a half shelves of that features pastry, dough and morning goods. What has amazed me, though, is the consistently high level of demand for frozen fruit.

I guess that this is a convergence of a number of bigger trends: health and wellness; a desire to avoid food waste (a lot of items come in resealable bags); the renaissance of breakfast during the pandemic; a growing acceptance of frozen as a broader category; and possibly a little bit of stockpiling mentality.

A few of the 15 or so SKUs (breakfast toppers, avocado chunks and smoothie mixes) are being helped by the return of breakfast as an in-home consumption occasion. The avocado chunks (no doubt destined to be smashed and put atop sourdough with poached eggs) are a great idea. I’ve lost count of the avocados I’ve binned because they are either bulletproof or hopeless mush – so the ability to have a reliable stock of edible avocado is a nifty concept that would help minimise waste as a bonus.

To be honest, I’m not entirely sure how the rest of the range gets consumed. I’m guessing a lot of it ends up in porridge, cakes, smoothies, pies or crumbles, while some of it might well get defrosted and eaten as an alternative to fresh or canned produce. The reviews section of the online store, meanwhile, reveals that some may end up in gin and tonic, which rather undermines my health and wellness theory.

There is a significant price advantage over fresh equivalents – most items come in at less than half the price – so one might surmise that the popularity of frozen fruit could be heading for a further surge as the economic fallout from the pandemic reveals itself over the coming months. This is already an interesting route to market and one that might merit further consideration, particularly for UK growers in a post-Brexit environment.