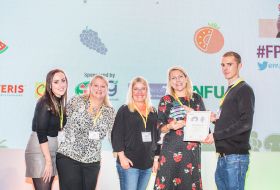 The team from Berry Gardens collect their Charitable Initiative award

FPJ readers have voted for their industry champions at the 2018 UK Fruit & Vegetable Awards.

The awards, which see subscribers pick their winners, were presented at the Ricoh Arena in Coventry on the eve of FPJ Live 18 at a fun and informal Awards Social.

Big winners on the night included MMUK, whose initiative with G's, Waste Not, collected The Sustainability Award and Best Retail Concept.

It was a good night for Berry Gardens, who also picked up the award for best Charitable Initiative.

Produce Solutions, a division of Greenvale, got the nod for best Initiative in Growing or R&D, while G's collected another prize in the Coveris Product or Packaging Innovation category for its new mushroom packs.

Aldi's Get Set to Eat Fresh campaign won it the best Marketing Campaign award, while readers voted Tesco their Fresh Produce Retailer of the Year.

FPJ editor Michael Barker said: "Our first-ever awards night was a lot of fun and it was a great pleasure to see the winners collect their well-deserved trophies. The competition was stiff this year, and the winners can truly say they are their peers' champions."