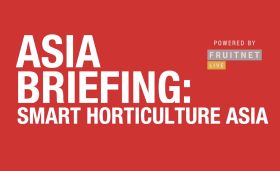 Schmeitz made the revelation that the value of a piece of fresh produce in the modern-day market is based on the quality of production data.