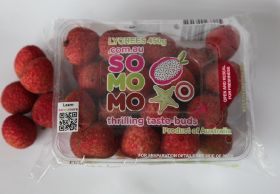 The brand, which began with the launch of lychees and expanded to longans, has since shown steady growth in interest and sales.

Most recently, Somomo’s product retailer and consumers have expressed increased confidence in exotic fruit, which has translated to a 23 per cent growth in sales in the last financial year. It means relatively unknown exotic fruits are now heading into the realm of mainstream.

Somomo targets the whole supply chain. Through clear purpose-designed film, which is resealable and extends the fruit’s shelf-life from eight hours to many days, lychees and longans no longer present as potentially wasteful or difficult fruit to sell or to purchase.

The Somomo campaign began in 2014 with research into consumer and retail knowledge about exotic fruit. The Somomo brand was developed and rolled out in 2015 at Woolworths, sold in 250g packs for new consumers and 450g packs for familiar consumers.

According to O’Shea, the current lychee season looks strong for the early part, with harvest kicking off in late October.

“A good flowering and fruit set in Far North Queensland suggests the 2017/18 season will have larger volumes of produce than the past two to three years, although Southern Queensland will see a significant drop in yields. This has the potential to affect prices around Christmas and beyond,” O’Shea said.

Looking ahead, plans to extend the Somomo marketing approach to more exotics are on the table.