New red-blush offering being grown in Australia's Goulburn Valley, with sales to begin in July 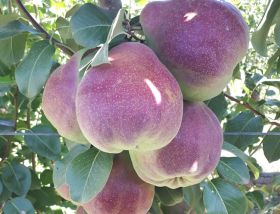 A new branded variety looks set to add plenty of personality to the pear category.

Characterised by a bright red blush, Ricó pears will hit retail shelves for a short time this year, with the aim of capturing the attention of a new generation of pear lovers.

“We did a significant piece of research last year, which validated a widely held belief that pears are seen as a fruit for older people,” said Andrew Hooke, director of global development at Apple & Pear Australia Limited (APAL), the pear’s master licensee.

“With Ricó, we’ve got an exciting, blush variety which tastes sensational and has some real personality. We think it will appeal to younger generations.”

Developed by the Victorian Government’s Horticulture Centre of Excellence at Tatura, the ANP 0131 variety, to which Ricó lends its name, is currently being produced by four growers in the Goulburn Valley.

After harvesting around 140 tonnes of the fruit last year, the growers anticipate available volumes will double in 2019, which should pave the way for a sales programme from the beginning of July.

A European-style pear that requires conditioning once picked, the sales window for Ricó will initially span July–December once trees reach full maturity, according to Cameron Carter of Seeka Australia, one of the four growers in the Goulburn Valley.

“There’s still a lot to learn about this variety but what we’ve seen so far we’ve been impressed by,” Carter said.

“Its shape and size are similar to a Packham and whether you eat it hard or soft it has a really nice taste. It stores really well, and it has held up to the small export trials we’ve done with it.”

Read more about Ricó pears in the Autumn edition of Produce Plus Magazine, out now.