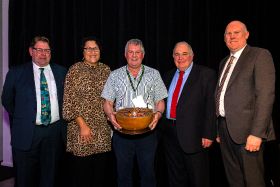 John Randall has been recognised for his contribution to New Zealand’s apple and pear sector.

Examples of Randall’s collaboration with industry include his involvement with OAPs (Official Assurance Programmes) negotiated between MPI and importing countries; working with industry and overseas regulators to improve and simplify the pre-clearance programme for pipfruit to the US; and his ongoing work towards the universal acceptance of a systems approach across all markets.

He became the first government official to receive the award in its eight-year history.

“Most, if not all previous recipients lived or worked in New Zealand’s growing regions and were familiar to everyone in the apple and pear industry. This year saw someone receive the award who may not be familiar to everyone,” said Simon Thursfield, a member of NZAPI’s Market Access Advisory Group (MAAG).

“Sitting on the MAAG, I realise the complications, risks and constant challenges of maintaining and in some cases, obtaining market access to every country we would like to sell our apples and pears to. It is an ever-evolving challenge, as countries around the world either for political, biosecurity or other reasons make life tougher with more complex phytosanitary and food safety demands.”

“John has been with MPI for 40 years in various roles and over that time has gained immense experience and even greater respect. Thinking about John and his 10-year history with the industry, his contributions are many and his strength is in his collaborative approach to issues as they arise.”

Randall said he was honoured to receive the award.

“It came as a complete surprise,” Randall explained. “I think the award is also a reflection how well the apple and pear industry and the ministry are working together to meet importing country requirements and maximise exports.”