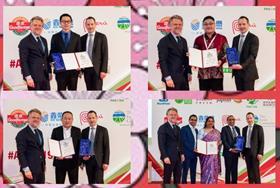 The Asia Fruit Award is given in three core categories – ‘Marketing Campaign of the Year’, ‘Importer of the Year’ and ‘Produce Retailer of the Year’–while the ‘Impact’ Award recognises significant contribution to developing the fresh produce business in Asia.

Rockit Global, the company behind miniature Rockit apples marketed in convenient recyclable tube packaging, scooped the Marketing Campaign of the Year Award for its new brand campaign in China.

China has grown rapidly to account for 50 per cent of Rockit’s global sales, and the company launched a consumer-centric marketing campaign in 2019 focusing on the functionality and benefits of Rockit apples.

The campaign aimed to appeal directly to Rockit’s target demographics of children (and their carers) as well as busy young professionals. Rockit apples were positioned as a healthy and convenient snack alternative for parents and grandparents collecting children from school, and for young professionals seeking healthy options for snacking on throughout their working day.

With a tagline in Mandarin ‘This little goodness you can hold’, Rockit undertook a number of promotional activities, including a campaign for Children’s Day on 1 June. Rockit also cooperated with leading Chinese fruit store chain Pagoda to launch Rockit apple-themed Pagoda stores to maximise profile and promotion.

E-commerce has been a key sales channel for Rockit in China, and the company made breakthroughs on this front, joining the New Zealand Food Basket alliance, which launched its first New Zealand Flagship store on Tmall Fresh, in addition to opening a flagship store on JD.com.

“Ensuring your brand stands out in a crowded market such as China is always a challenge,” said Dai. “This award is fantastic recognition of a brand message that was tailored to engage and resonate with Chinese consumers and was well executed across a range of channels.”

Indonesian company Laris Manis Utama (LMU) won the Asia Fruit Award for Importer of the Year.
Established 23 years ago, the company was recognised for its market-led approach to developing Indonesia’s fresh fruit import business, which has been driven by significant investment.

LMU has invested heavily in its logistics and cold chain infrastructure, with state-of the-art distribution facilities in Jakarta and Surabaya. It has also developed its network of wholesale branches across Indonesia, helping to boost access to high-quality imported and domestically-grown fruits for consumers across the archipelago, said Hey.

The company was also recognised for its proactive and structured approach to marketing imported fruits. Besides running retail campaigns for leading brands of imported fruits, the company recently launched its own brand My Fruit, which it is promoting in traditional retail channels, brick-and-mortar stores, online and on trucks. LMU has also begun selling fresh fruit online with various e-commerce partners, as well as launching its own fruit retail shops under the Frestive banner.

“We are extremely delighted and honoured to receive the Importer of the Year Award from such prestigious organisations,” said LMU vice-director Hendry Sim on accepting the award. “This award is a confirmation to my team back in 26 cities across Indonesia that our dedication, innovation and hard work over many years in fresh produce has brought industry recognition.”

The Produce Retailer of the Year Award went to Yonghui Superstores, one of China’s fastest-growing grocery retailers.
In the face of fierce online competition, Yonghui was singled out as a brick-and-mortar retailer that has successfully adapted its operations to meet the changing needs of Chinese consumers with more premium fresh food offerings and the development of a ‘New Retail’ model.

Fresh produce has long been one of Yonghui’s core strengths, underpinned by a focus on direct sourcing and a strong buying team, and underlined by the retailer’s private label for fresh food, Hey noted. More recently, fresh produce has become a key differentiator of Yonghui’s offering as the retailer works to cater to consumer demand for a wider range of products and services in China.

Yonghui stores stock an assortment of fresh produce, including a mix of private label and third-party brands. This includes an impressive depth and range of imported fruits.

Buying online and fresh convenience are two other headline consumer trends in China, and Yonghui has incorporated online delivery with packaged products, with many of its stores supporting delivery within one hour.

President of Yongui Superstores, Li Guo, said the group was greatly honoured to receive such a prestigious award.

“We have developed more than 700 large and medium-sized superstores and more than 500 neighbourhood stores across 23 provinces nationwide,” Li noted. “We’re actively and continuously strengthening our in-store services and home delivery business to create an online-to-offline, omnichannel retail model, and to bring a better consumer experience to customers.”

Launched last year to recognise a person, company or organisation that has made a significant contribution to developing the fresh produce business in Asia, the 2019 ‘Impact’ Award was presented to Indian fresh produce importer-grower-distributor Yupaa Group.

Celebrating its 30th anniversary this year, Yupaa was co-founded by husband-and-wife team Ambrish and Yujita Karvat, with operations now managed by their son Parth.

The Mumbai-based company was singled out for the pioneering role it has played in developing fresh fruit imports to the Indian market, which opened up 20 years ago, as well as its work in nurturing high-end domestic production of berries.

“Yupaa was one of the first companies to bring imported fruits into India, and they have remained at the forefront in introducing new fruit varieties, origins and brands to the market,” said Hey. “Importantly, they had the foresight to work on developing models to import high-quality fresh fruit to the Indian market on a year-round basis. They have helped to build leading brands in the Indian market from New Zealand, the US, Chile and South Africa among other origins.”

Yupaa was also recognised for its pioneering efforts in India’s berry industry. Ambrish and Yujita Karvat set up Yupaa in 1989 with a modern strawberry-growing venture in Panchgani, Maharashtra – Parth Farms. The venture cultivated US varieties that yield large-sized berries and marketed them under the Yupaa brand, one of the first branded fruits in India.

Ambrish estimates some 3,000 acres (1,200ha) of strawberries are today grown in India based on this model. Around 20 years later, the family set up a raspberry-growing operation and this year they harvested their first blueberries for the Indian market.

The Indian market’s vast growth potential, and Yupaa’s solid foundation with a pan-India distribution network, drew global group Capespan to make a strategic investment in the company in 2016, acquiring a 35 per cent share in Yupaa Fresh.

“It means a lot to us for Yupaa’s ‘Impact’ to be being acknowledged and celebrated by such reputable and credible organisations, which have in-depth knowledge of our sector,” said co-founder Ambrish Karvat, who accepted the award together with wife Yujita and son Parth.

“This award is truly the result of the impact we could initiate and facilitate by opening India’s doors to various [supply] origins, their growers and exporters, and the impact we created for our customers and the consumers of India by bringing fruit from around the world to their plates and adding value in every way possible.”

The four winners of the Asia Fruit Awards were presented with their trophies and certificates by Wilfried Wollbold, commercial director of Asia Fruit Logistica organiser Global Produce Events, and Chris White, managing director of Fruitnet Media International, which publishes Asiafruit Magazine and organises the Asiafruit Congress.

The Asia Fruit Awards were presented before the Networking Lunch at Asiafruit Congress, Asia’s premier fresh produce conference event held in Hong Kong. The conference sets the scene for Asia Fruit Logistica, which takes place on 4-6 September at AsiaWorld-Expo Center.