Australian vegetable exports on the rise 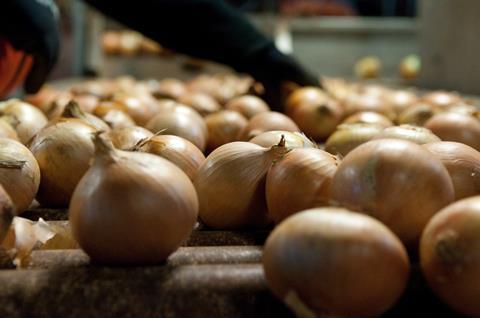 Onions were the driving force behind a surge in Australian vegetable exports in 2019.

According to Global Trade Atlas and Trade Map data released by peak industry body Ausveg, the value of the country’s total fresh vegetable exports came in at A$299m in 2019, an increase of 6.6 per cent year-on-year. Export volume totalled 230,000 tonnes, up 5.4 per cent on 2018.

The value of Australian onion exports rose 67 per cent to A$40m in 2019. Growers in Tasmania, Western Australia and South Australia spearheaded much of this growth, as the onion industry looked to capitalise on strong demand from the European market, which was in state of undersupply after a lean domestic harvest in this part of the world.

Carrots remained Australia’s largest fresh vegetable export by volume in 2019, accounting for 34 per cent of all products sent internationally. Potatoes, celery, broccoli and cauliflower were also shipped in meaningful volumes.

“The continued rise in the value of vegetable exports is particularly impressive when you consider that Australian vegetables, including onions, are lower-priced products that are being grown in a high-cost environment, due to the rising costs of labour, electricity and water,” said Michael Coote, Ausveg’s national manager – export development.

“So even as they experience vulnerability to fluctuating exchange rates that make it harder for vegetable growers to compete in a global market, fresh vegetable exports continue to grow.”

The top five international markets for Australian fresh vegetables remained largely unchanged from 2018 to 2019, with Singapore remaining the leading destination by volume. The UAE, Japan, Malaysia and Saudi Arabia – which replaced Hong Kong – rounded out the top five. These markets received around 53 per cent of Australia’s total fresh vegetable export crop.

Coote said considerable effort was being made to help growers increase their capability and opportunities to enter export markets. He highlighted the Vegetable Industry Export Program, delivered by Ausveg in partnership with Hort Innovation, as one such example.

“In 2019, the program facilitated the development of export capabilities for the industry by bringing over 40 buyers into Australia to see local production, taking over 40 growers on outbound trade missions, and up-skilling another 80 growers through export readiness training,” Coote explained.

Coote said the industry was well on its way to reaching the ambitious target of A$315m in fresh vegetable exports by 2020, as outlined in its industry export strategy.

“We are working with growers to ensure they have the skills and knowhow to improve their ability to export their produce and capitalise on increasing demand for fresh, Australian-grown vegetable produce,” Coote said.