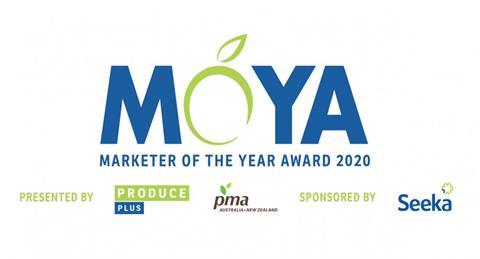 Produce PlusandPMA Australia-New Zealand (PMA A-NZ)are pleased to announcePinnacle Fresh as the winner of the2020 Marketer of the Year Award (MOYA), proudly sponsored by Seeka.

The Melbourne-based company was recognised for its innovative ‘Dracula Citrus’ campaign, which has boosted sales of Australian-grown citrus lines both domestically and internationally.

Originally developed for the US market, the Dracula Citrus brand is now present in six countries (including Australia).

Since the campaign’s launch in 2017, sales of Australian-grown blood oranges marketed under the Dracula Citrus brand have leapt from 228 tonnes (2017) to 695 tonnes (2019). Over 340 tonnes of Afourer mandarins were sold under the brand in 2019, up from 98 tonnes in 2018, while Cara Cara navels (110 tonnes) were also marketed under the label for the first-time last year.

The campaign’s primary focus has been at consumer level, with Pinnacle Fresh striving to create a sense of in-store theatre around its brand. Eye-catching point-of-sale materials – including pop up display bins, posters, drink and snacking recipe cards, PLU stickers and banners – have been used to create a highly visible and engaging shopping experience for consumers. These displays have been complemented by several in-store activations, such as juice tastings and cross promotions within liquor departments. 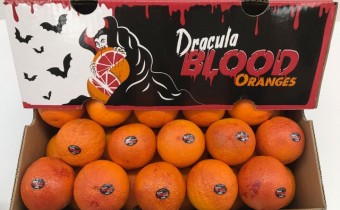 Pinnacle Fresh also promoted its brand strategy to stakeholders throughout the supply chain through trade press media and its presence at various international trade shows, while building further awareness of the Dracula Citrus label amongst customers and end consumers through various social media activations.

“The MOYA judges were impressed by the way this campaign harnessed marketing tools to create a unique experience for the consumer,” said Sam Clayfield, events and marketing manager of PMA A-NZ. “This experience not only provided a highly effective path to initial purchase, it also built a brand platform that gave consumers something to tie their experience to, which in turn drove repeat sales.”

The MOYA judges were also impressed by the campaign’s ability to improve the value proposition for a commoditised category.

The tagline ‘Wickedly Healthy’ was cleverly used to promote Australian citrus over the Halloween period in the US, positioning the fruit as a healthy alternative for trick-or-treaters.

As Halloween falls within the Australian citrus season, the US export window reduces pressure on the Australian domestic market, particularly as production volumes of blood oranges and Arfourer mandarins increase.

“The foresight to identify an opening that can improve the value proposition for a commodity category, then execute an effective and highly visible marketing campaign that facilitates sales growth is exactly the sort of excellence that MOYA celebrates,” said Produce Plus Magazine’s editor Matthew Jones.

“This campaign provides the perfect example of what can be achieved by thinking outside the box. We hope it serves as motivation for other companies to do the same, either here at home or internationally.”

Pinnacle Fresh was presented with Australasia’s premier marketing award for the fresh fruit, vegetable and floral industries during a webinar this morning (16 June). The online showcase celebrated the campaigns developed by all five MOYA finalists. The four other finalists were:

“The MOYA judges want to acknowledge the high calibre of entries received this year, with nominations submitted from a wide range of stakeholders,” said Jones. “It really highlights the level of creativity that sits within Australasian fresh produce marketing, which is a great credit to the industry.”

The2021 PMA-Produce Plus Marketer of the Year Awardwill be presented at next year’sHort Connections event, being held in Brisbane on 7-9 June. The award continues to celebrate outstanding achievement in the field of fresh produce and floral marketing across Australia and New Zealand. It is open to both individuals and team members from any part of the value chain.

The upcoming Spring edition of Produce Plus Magazine will include an interview with the Pinnacle Fresh team.Subscribeto receive your copy of the magazine and access the new Produce Plus app.