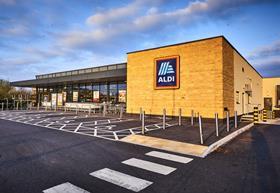 Aldi hit a record-high market share of 8.6 per cent

Supermarket sales are falling as more consumers enjoy meals out of the home and adapt their shopping behaviour more to inflation than the pandemic, Kantar reports.

The latest take-home grocery figures from Kantar show that supermarket sales fell by 6.3 per cent over the 12 weeks to 20 March 2022. Sales are still up compared to two years ago, though only by 0.7 per cent as the comparison now includes the record buying seen before the first lockdown in March 2020.

Fraser McKevitt, head of retail and consumer insight at Kantar, said:“It’s no surprise that sales are down over the latest period as consumers are now more confident eating out of the home again.

“As well as enjoying meals out with friends and families, people will have also been grabbing food and drink on the go from supermarkets while travelling or at work. Those sales aren’t included in these take-home figures, but they will be adding to the grocers’ overall performance.

“What we’re really starting to see is the switch from the pandemic being the dominant factor driving our shopping behaviour towards the growing impact of inflation, as the cost of living becomes the bigger issue on consumers’ minds.”

The latest data marks the first annual decline in grocery shopping trips for 12 months. Households made 15.4 visits to the supermarket on average last month, compared with 15.6 trips in March 2021.

McKevitt explained:“We’re socialising and commuting more than at any other point since the pandemic began, so consumers don’t have as much time to go to the shops. They also simply don’t need to buy as much food and drink to have at home.

“Higher fuel prices could be playing a role here too as people try to save petrol by visiting the supermarkets less often – something for us to keep a close eye on over the coming weeks.”

Grocery price inflation hit its highest level since April 2012 at 5.2 per cent over the four weeks to 20 March, with consumers and retailers expected to take action to manage the growing cost of grocery baskets.

“Consumers are increasingly turning to own label products, which are usually cheaper than branded alternatives,” said McKevitt. “Own label sales are down in line with the wider market but the proportion of spending on them versus brands has grown to 50.6 per cent, up from 49.9 per cent this time last year.

“Meanwhile the grocers are also adapting their pricing strategies in response to the rising cost of goods. One trend we’re already tracking is the move away from selling products at ‘round pound’ prices. The percentage of packs sold at either £1, £2 or £3 has dropped significantly from 18.2 per cent last year to 15.9 per cent this March.”

While Covid-19 is loosening its grip on day-to-day grocery habits, some pandemic trends are proving stickier than others, namely online shopping, with 12.6 per cent of sales made online in March 2022 compared with just eight per cent three years ago.

Shoppers over 65 are leading the charge, and the proportion of this demographic buying online has doubled from nine per cent to 18 per cent over the past three years.

Looking at individual grocers’ performance this month, the discounters Aldi and Lidl led the pack, both boosting sales over the 12 weeks by 3.6 per cent versus last year. This rise in sales pushed Aldi to a new record-high market share of 8.6 per cent. It was especially successful in attracting back older customers this month, with a 16 per cent increase in people aged over 55 buying from the grocer.

Lidl equalled the 6.4 per cent market share high it achieved in November, also attracting back customers over the age of 55. It did particularly strongly in the bakery and chilled convenience aisles, with sales up 17 per cent and 11 per cent respectively.
The only other retailer performing ahead of the market is Tesco, taking 27.4 per cent share, up from 27.1 per cent during the same 12 weeks of 2021.

Sainsbury’s market share now stands at 15.1 per cent, while Asda holds 14.5 per cent, and Morrisons 9.5 per cent. Co-op, Waitrose and Iceland’s shares are six per cent, 4.8 per cent and 2.2 per cent respectively. Online specialist Ocado has 1.8 per cent of the market.