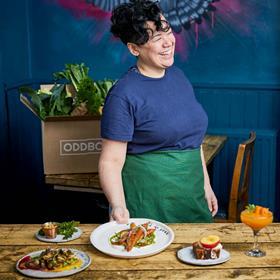 The ‘Odd Five Ways’ menu, which will be available from 2-8 February, will feature dishes and a cocktail made from wonky and surplus fruit and veg rescued from farms by Oddbox.

Some 1.2 billion tonnes of food are lost globally on farms before, during and after harvest. The Odd Five Ways menu will help raise awareness of this wide-scale problem and encourage people to eat the produce that’s been grown rather than letting it go to waste.

This season Oddbox has rescued over330tonnes of carrots from growers, with a percentage rejected by retailers for being too big to match specifications.

These carrots will be the star of the Odd Five Ways menu, featuring in every course, from thecarrot-based cocktail aperitif to a 'root vegetable twist' on a classic carrot cake.

Other rescued fruit and veg on the menu will include sprouts, kale and nectarines.

'This helps them sell off their delicious produce no matter whether they have “too many” or it's deemed ‘too odd-looking’. Grower-led eating helps tackle the endemic issue of surplus and cosmetic specs in the food industry and is therefore an effective way to reduce food waste, which, as we know, is a major contributor to the climate crisis, accounting for 10 per cent of all greenhouse gas emissions.”

Odd Five Ways is a vegan-friendly play on the famous ‘pork four ways’, a technique honed by top chefs to demonstrate the versatility of pork.

The menu has been developed by Gina Hopkins of 2021 Masterchef Professionals fame and executive chef at The Spread Eagle.

Being flexible with the menu design and keeping low waste front of mind, Hopkins was challenged by Oddbox to only use the rescued produce available in that week’s Oddbox in the five courses.

The Spread Eagle is London’s first fully vegan pub and was nominated for the Innovator of the Year for the GQ Food & Drink Awards in 2019.

The menu will be available from Wednesday 2 February until Tuesday 8 February, but not onSunday 6 February.Priced at £30, £5 from each diner will be donated to food redistribution charity The Felix Project, one of Oddbox’s charity partners.