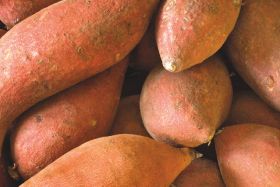 Sweet potatoes could help keep a stroke at bay, new research claims to have found

Enjoying a diet packed with bananas, sweet potatoes and other potassium-rich foods can dramatically lower the risk of stroke, according to new research.

The team of researchers from the US has claimed that people with high levels of potassium in their daily diet are far less likely to suffer the deadly brain attack.

If their study results are correct, it would mean people could protect themselves from suffering a disability-inducing or deadly stroke simply by having a diet rick in bananas, white and sweet potatoes, and white beans.

Eating the most potassium also made them 10 per cent less likely to die, the researchers found.

Dr Sylvia Wassertheil-Smoller, the study's senior author, who is based at the Albert Einstein College of Medicine in Bronx, New York, said: "Previous studies have shown that potassium consumption may lower blood pressure. But whether potassium intake could prevent stroke or death wasn't clear.

They looked at how much potassium the women consumed, as well as if they had a stroke, including ischaemic and haemorrhagic, or died during the study period.

Women in the study were stroke-free at the start, and their average dietary potassium intake was 2,611 milligrams a day from food, not supplements.

Among women with high blood pressure or who were taking drugs for the condition, those who ate the most potassium had a lower risk of death, but potassium intake did not lower their stroke risk.

But they warned that, although increasing potassium intake is probably a good idea for most older women, there are some people who have too much potassium in their blood, which can be dangerous to the heart.

"People should check with their doctor about how much potassium they should eat," she said.