Mass traps, field hygiene and chemicals are among the tools berry producers need to control the SWD fruit fly 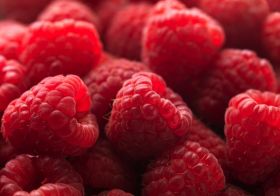 Raspberries are vulnerable to SWD infestations

Berry producers should use a combination of mass traps, field hygiene and chemical treatments to control the Spotted Wing Drosophila (SWD) fruit fly, according to a talk at Fruit Logistica last week.

Catherine Baroffio, head of berries at the Swiss institute for plant production sciences IPS Agroscope, urged growers not to delay in preparing for an outbreak of the non-native fruit fly, which attacks ripe as well as overripe fruit and can have devastating effects on crops.

The fly is particularly threatening as it works very fast – so a crop that was seemingly healthy could become infested within two days, Baroffio said.

“The old idea that there is a super-insecticide is never going to happen,” she said. “This pest is new, and they’re very happy with lots of food to eat, so you’re going to have to learn to live with it.

“Our recommended strategy to berry producers is to install a mass trap, use one application of Spinosad when you have caught a lot, and then reset the traps.”

She said hygiene is the most important way of controlling the spread of SWD – growers should ensure there is a quick turnaround in between harvests, and make sure there is nothing left on the ground.

Baroffio, who was speaking at one of the Future Lab sessions at last week’s Fruit Logistica, said she is also trialling new methods, such as the use of lime, as a possible alternative to chemicals.

“We use a lime solution of about 2kg per ha, deposited in the ground. It has a tremendous impact, so for us it was very interesting although more work is needed to see what impact the lime has on healthy plants,” she said.

She also warned that the increasing number of SWD flies caught in traps is “not at all funny”, and said that there was a “huge jump” in numbers caught between 2012 and 2014 as temperatures did not fall enough to kill the flies.

“They can hide under snow quite easily, so really it is better to have colder temperatures and snow,” she said.

Although SWD was discovered in 1916 in Japan, it was first identified in both Spain and California in 2008. Since then it was been caught across Europe, and was confirmed to have spread north to Scandinavia for the first time last year.