Keeping up with demand could be key future challenge for citrus industry, which has seen exports surge by 30 per cent in 2015 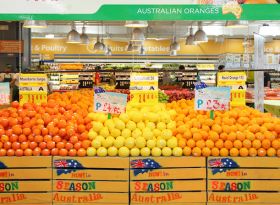 The Philippines has been "standout performer" among emerging markets

Australia’s citrus export industry continues to enjoy a remarkable turnaround in fortunes, with shipments for 2015 expanding by almost a third on last year’s record result.

“We’ve smashed our export record set last year, which is very exciting,” CEO of Citrus Australia Judith Damiani told Asiafruit. “The top six markets accounted for most of the growth – namely Hong Kong/China, Japan, the UAE, the US and Singapore. China continues its stellar rise.”

Indeed, China was the big mover in terms of markets, registering another dramatic increase in volume in 2015. Hong Kong and China combined took some 66,000 tonnes of Australian citrus through October, up 53 per cent on the same period last year.

“It’s pleasing to be able to compete in China amid increasing volumes from South Africa – it gives us heart,” said Citrus Australia’s market development manager Andrew Harty. “China is a much bigger market than anyone appreciated and it has absorbed this big increase in volumes at good returns. We see lots more room to move in China, and we’re focused on expanding into the west."

Damiani singled out the Philippines and Thailand as the standout performers in the “emerging markets category”. Thailand’s imports were up by 60 per cent to 7,182 tonnes in the 10-month period, while the Philippines registered 37 per cent growth to hit 4,721 tonnes.

“The Philippines has grown from almost nothing five years ago,” said Harty. “We’ve put a lot of effort into promotions to underline the taste and sweetness of our fruit. This has paid off and we see huge future potential there.”

The only real downside for the industry came in Indonesia, where exports fell 23 per cent to 8,825 tonnes. The drop was due to the country’s controversial quota import system, which saw the market close to all citrus imports (apart from lemons) from July to September. Matters looks set to get worse in 2016, with the Indonesian government only expected to allow citrus imports in the months of February/March and September/October, thereby taking out a chunk of the Australian export season.

Indonesia is a key market for Australian mandarins. Even so, the mandarin industry has achieved stellar results in 2015. Exports surged 61 per cent to 47,734 tonnes to capture a 25 per cent share of total citrus exports.

Damiani summarises the industry outlook for 2016 and beyond as “very positive”. Indeed, the industry is in a very different situation to six years ago when growers were toiling with low prices and oversupply. The value of exports has grown by some 55 per cent since then, when they were worth A$169m (2009/10).

“For the first time in a long time we see a lot of reinvestment in the industry. Confidence is returning,” she told Asiafruit. “A number of growers are buying more orchards or re-planting. It’s an exciting time, and we need to increase the number of export-registered orchards to keep up with demand.”