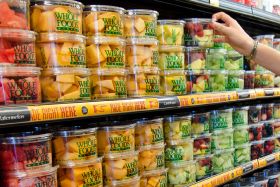 Amazon came two steps closer to buying Whole Foods on Wednesday when the deal was approved by a US regulator and the natural and organic food retailer’s shareholders.

The US Federal Trade Commission issued a statement saying it would not investigate the proposed merger further after deciding it would not substantially lessen competition.

Whole Foods, meanwhile, confirmed that its shareholders had voted in favour of the deal, as expected.

Antitrust experts were confident the US government body would approve the deal because Amazon’s grocery sales are still quite limited and Whole Foods only accounts for a small percentage of food sales in America, Reuters reported. But some thought the government might block the deal for fear that Amazon would use its supply chain power to monopolise a new market.

The deal, if finalised, would combine Amazon’s expertise in delivery with Whole Foods’ store network, allowing Amazon to showcase products and pack deliveries at its 465 physical stores across the US, Canada and the UK, the BBC reported.

It is a sign of Amazon’s ambition to further establish itself in the grocery sector, following the launch of AmazonFresh in several of America’s major cities as well as London and Berlin in the past five years.

It was Whole Foods that approached the online delivery giant about the merger this spring, according to the BBC, responding to pressure from investors as it tried to reverse a decline in sales.

And in June Amazon tabled a $13.7 billion (£10.7bn) offer to buy the grocery chain, which beat off competition from six other interested parties to be offered the merger.

Amazon said it was on track to close the deal, which is expected to be completed later this year.