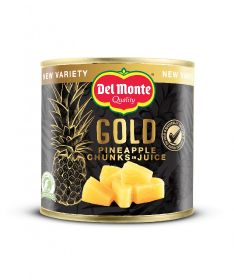 Del Monte is hoping to drag tinned fruit into the 21st century with the launch of its premium ‘Gold’ range, designed to appeal to younger consumers.

The fruit giant has launched two products in the new line – pineapple chunks and pineapple slices – both sold in a 435g can with juice.

Del Monte’s commercial director for the UK and Ireland, Martin Tilney, said he was keen to attract younger shoppers to the canned fruit aisle, which can be considered an old-fashioned item nowadays.

The Gold range features “impactful black and gold packaging” to give the product a “premium and stylish look”, Tilney said, adding: “We’re confident that Gold will attract a wider and younger audience who may not have previously considered purchasing canned fruit.”

A new variety called Gold will be used for the range, developed from the widely produced MD-2 pineapple.

“Previously, pineapple quality varied in winter months, with greater acidity and a more tart taste,” said Tilney. “Now with our own Gold variety, picked ripe and ready to eat for optimal results, the best taste and quality experience is ensured all year round.”

The variety’s flesh has a deep golden colour and a soft texture, with Del Monte claiming it is “naturally sweeter” than the standard Smooth Cayenne variety.

“To ensure the best standards in taste, Gold is picked only when fully ripe,” the company added. “It is this key factor which prompts the premium pricing.”

On the down side, leaving fruit to ripen for longer means harvested volumes are lower than they would be otherwise. However, the variety has been tailored to the canned fruit market, with its square-shouldered shape maximising the amount of fruit that can be used for canning, which reduces waste.

Now available at major retailers, the cans will be rolled out across the wider retail trade throughout 2018.