Peru limbers up for starring role at AFL 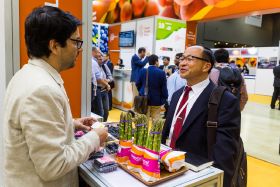 Peru will send its biggest ever delegation to next week’s Asia Fruit Logistica in Hong Kong, where it will become the first Partner Country in the fair’s 12-year history.

Around 300 representatives from 60 companies and more than 20 sectorial associations will be present on a 240m2 stand, with blueberries, avocados, mangoes, table grapes, citrus, bananas and pomegranates among the products on display.

Peru’s agri-exports to Asia totalled US$617m in 2018, a 22 per cent increase over the previous year. China was the biggest market, taking 24.7 per cent of the export volume, followed by South Korea on 24.4 per cent, and Hong Kong on 18.5 per cent. Table grapes, avocados, blueberries and bananas topped the list of most exported products.

Figures for the first half of 2019 suggest that the rate of growth will continue this year. According to PromPerú, the markets that have shown the greatest dynamism this year are Indonesia, Japan, Hong Kong and China.

With the aim of maintaining this growing export trend, the Andean nation will be promoting its Super Foods Peru’ at a number of events in the region, including the Beijing International Horticultural Exhibition which celebrates Peru Day on 1 September.

Peru has enjoyed a meteoric rise through the ranks of Latin American fruit and vegetable exporters in the past decade. Today it is the region’s biggest exporter of asparagus, second-biggest exporter of blueberries, avocados and mandarins, and third-biggest table grape exporter.