Europe's apple and pear crops down

Apple volumes to fall below 10m tonnes for only third time in past decade, while pear forecast is smallest for 15 years 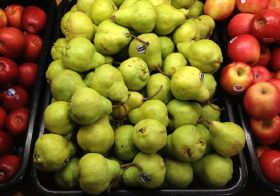 Apple and pear production in the European Union this season will be "significantly lower" than last year and, as reported by Eurofruit last month, the forecast apple crop is set to fall below the 10m-tonne mark for only the third time in a decade.

Publishing the forecasts, the World Apple and Pear Association (WAPA) said apple volumes would decrease by 9 per cent against the previous year's figure to 9.74m tonnes, while it estimated the pear crop would be around 2.06m tonnes – 22 per cent lower compared with 2011 and the lowest forecast figure since 1997.

EU topfruit volumes are also set to be well below the recent average, it said, given unfavourable weather conditions which affected production during the winter and spring across Europe.

More than 250 representatives of the international apple and pear sector met today in Toulouse, France, at the 36th annual Prognosfruit conference, where WAPA released its crop estimates, collated from forecasts made by individual country associations.

The apple production forecast is 7 per cent lower than the average for the last three years, WAPA said.

Golden Delicious production has apparently been hit the worst – down 15 per cent to 2.21m tonnes – while Gala output is set to decrease by 6 per cent to 1.07m tonnes and Red Delicious volumes should fall 18 per cent to 555,000 tonnes.

Production of Idared, notably, is set to increase by 34 per cent, mainly the result of a larger crop in Hungary and Poland.

The vast majority of countries in the EU are expecting to see their apple production fall this year.

France appears likely to suffer most severely, having estimated that volumes will be down 32 per cent year-on-year and 30 per cent on the average for 2009-2011.

Elsewhere in the Northern Hemisphere, apple crops are also expected to decrease compared with last year, with a 3 per cent estimated downturn in Turkey and lower output too in the Balkan countries.

Russia and Ukraine's crops, meanwhile, are forecast to increase by 8 per cent and 4 per cent respectively due to new bearing trees.

Official data for the US is due to be released in mid-August, but initial indications are that the country's apple crop will be 15 per cent smaller due to heavy frost in the Midwest region and, to a lesser extent, in the north-east.

As for Europe's pear crop, growers have predicted a significantly smaller crop, down 22 per cent on the 2.63m tonnes turned out in 2011.

This season's forecast is also 17 per cent lower than the average for the past three years.

Production of the Conference variety, which dominates pear production in the EU, is likely to decrease by 21 per cent to 743,000 tonnes.

WAPA said it expected William BC would decrease by 19 per cent to 255,000 tonnes, meanwhile, and that volumes of Abate Fetel – Italy's primary pear variety – would also fall by 26 per cent to 284,000 tonnes.

Eurofruit also understands from sources in the trade that a forecast 40 per cent fall in EU production of Doyenne du Comice to 68,000 tonnes is largely the result of a disastrous growing season in France, where as much as 90 per cent of the variety is thought to have been lost.

Elsewhere in the Northern Hemisphere, pear crops are also going to be down compared with last year, notably in the US (-7 per cent) and Ukraine (-8 per cent).

"Overall, climatic conditions have not been favourable in many parts across Europe during blossom and the beginning of the growing period of the fruit," commented WAPA general delegate Philippe Binard.

"Under these particular weather circumstances having their impact on the production, the relevance of transparency of data is important and the effort of Prognosfruit/WAPA in this respect is underlined."

He added: "The new season is to start according to the normal harvesting schedule on a basis of clear stocks from the last season and no overhang with Southern Hemisphere fruit while there are no pending stocks for apple juice concentrate which should strengthen the market for the benefit of the sector and provide better return to growers after several difficult seasons."