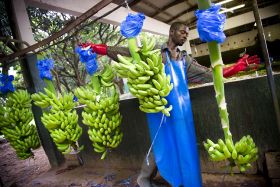 Banana importer-exporter All Good Organics has overwhelmed global conglomerates such as Google and Starbucks to be named the world’s fairest trader.

The New Zealand-based firm, which works with banana growers in Ecuador and Samoa, was presented with the accolade at the International Fairtrade Awards in Bonn, Germany, overnight (12 June).

“Fairtrade International have rewarded our strong commitment to Fairtrade and our continuing engagement with Fairtrade producers, from banana growers from the El Guabo Fairtrade cooperative to sugar, vanilla and ginger producers around the world,” the company said in a statement on its website. “We're stoked that our hard work has been recognised. Most Kiwi's believe everyone deserves a fair go, and this is a step towards a fairer world.”

All Good Organics began importing Ecuadorian bananas to the New Zealand market five years ago, with the assistance of Phoenix Organics. It now exports its sourced Fairtrade products to markets across the globe, including Australian and the UK.

“The Fairtrade system guarantees that growers of products like bananas get a fair deal for their efforts,” Coley told New Zealand’s 3News. “It's still a small percentage of overall sales and not every product can be Fairtrade, but in fresh produce bananas especially are probably the largest single selling line, so they do generate a lot of revenue.”