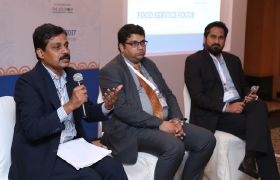 Fresh Produce India continues to cement its position as the annual meeting point for India’s fast-growing fresh fruit and vegetable business, after another successful showing in 2017.

More than 250 delegates from 23 different countries converged on Mumbai’s Trident Nariman Point Hotel on 27-28 April for this year’s event, organised by Asiafruit Magazine in association with The SCS Group.

The two-day convention-style format included an expo, plenary conference sessions and an array of workshops, giving delegates ample time to network, and a wide range of subjects on the programme.

Delivering the keynote presentation on the opening day of the conference, Asish Puri of OC&C Strategy Consultants told delegates there was no better time to invest in India than the present.

“There are enough macro trends to indicate how things will transform in the near future,” Puri said. “There’s only bits and pieces in place today, but in five to seven years from now the dynamics will be completely different. Players in this sector need to start investing now.”

Puri said India’s youthful population would play a significant role in how the consumer space shaped up. It was a point reiterated by Purnima Khandelwal, chief executive and co-founder of INI Farms, a member of a panel discussion that followed Puri’s presentation.

Khandelwal said the way Indian consumers shop for fresh produce is already changing, with more traditional methods such as touching and smelling each individual piece of fruit becoming less common. She anticipated this trend would accelerate in years to come.

“The next generation has no real sense of what quality means,” Khandelwal said. “Instead they go by messaging relating to things like standardisation, food safety, nutrition and health.”

The digital space is seen as a key avenue for driving brand recognition, as India’s expanding middle class has more ready access to mobile devices such as smartphones, tablets and laptops. Puri said the advantages of digital marketing extend beyond ease of use and access.

“The digital space is not just convenient, it allows you to engage with consumers actively and directly.”

Sudipta Mukhopadhyay of Walmart India said companies willing to make meaningful investment in the industry could navigate these obstacles. “India is a huge market to tap for fresh produce, but you can’t tap it with shortcuts,” he explained.

In the workshop session ‘Grape gains – getting access to the best varieties’, Manik Patil, president of the Maharashtra Grape Growers Association, underlined the urgent need for new varieties in India’s table grape industry, which currently exports just 5 per cent of its total production.

Heavily reliant on Thompson Seedless, Patil said efforts were being made to widen the country’s varietal profile in order to have a more global appeal, particularly in Europe and neighbouring China. “People are demanding coloured varieties in international markets,” he explained.

Patil said the Maharashtra industry was largely made up of small-scale growers who have neither the income nor resources to individually take part in commercial breeding programmes. He said the industry, with support from the Indian government, needed to partner with a breeder to secure access to a number of new varieties, which can then be released publicly.

A potential suitor may be the Agriculture Research Organisation (ARO) Volcani Center – the research arm of the Israeli Ministry of Agriculture and Rural Development – which underlined the value of its breeding programme to delegates.

“Our uniqueness is being able to develop cultivars with appeal in both East and West,” said Dr Avi Perl, chief scientist at the Ministry of Agriculture in Israel.

Gerhard Dichgans, chief executive of Italian fruit growing consortium and exporter VOG, challenged the conception that an apple variety needs to be red for it to survive in India.

Using the success VOG has had with the trademarked Yello apple as a case study, Dichgans highlighted how his consortium has turned a possible weakness into a point of difference in markets around the world, where red apples have traditionally been considered the norm.

“It’s all a question of how you place it,” Dichgans said. “Innovation can be done here in India.”

Joining Dichgans in a panel discussion, Srinivasa Ramanujam, business head of Adani Agrifresh, agreed there was an opening for new apple varieties to succeed in India, although a cautious approach to market development was required.

“The surest way to kill something new is to flood the market,” Ramanujam explained. “The reason why varieties like Envy and Pacific Rose have been a success here in India is because they’ve come in small volumes.”

Closing out the conference programme was an insightful workshop on emerging suppliers and import categories in the Indian market.

Filip Fontaine of leading Belgian cooperative BelOrta and Tarun Arora of Indian importer IG International highlighted how they are working together to grow the market for Belgian Conference pears. While the long shape and typical skin of Conference pears may be different to what most Indians think a pear looks like, the offering is gaining traction thanks to a programme of in-store tastings and an extensive digital media campaign.

Fontaine said knowing the market landscape would be crucial to growing the import category in years to come.

“We often think of India as one country and therefore one market but it’s not. Each region is different,” Fontaine said. “To be successful, it’s important to put the right varieties in the right regions.”

Underlining his country’s potential as a supplier to the Indian market, Anton Kruger, chief executive of South Africa’s Fresh Produce Exporters’ Forum, highlighted the shipping time from Durban to Mumbai is a short 19 days, while Cape Town to Mumbai is 22 days.

Akhilesh Bhargava of AVI Global Plast and Siva Shankaran of Uflex illustrated the role that packaging can play in India’s fresh produce business, from shelf-life extension to merchandising.

In the opening plenary session to Day Two ‘Seeing the Value’, Jagdeep Koushik of Deccanfield Agro Industries delivered an insightful case study on his company’s banana business, explaining how it had tackled a number of the supply chain hurdles in India, from irrigation systems to grading and packing. Meanwhile, Maarten Oostenbrink of Ludvig Svensson discussed models for developing basic greenhouse structures in India that can be easily upgraded, using a case study from Kenya.

The role for covered cropping in India’s fresh produce sector was also highlighted in a special workshop hosted by HortiTechIndia, a consortium of Dutch companies and organisations bringing their skills and solutions to India.

A wide range of local and international exhibitors took the opportunity to showcase their offerings at Fresh Produce India Expo, which ran from 11am to 5:30pm on Day One and 10:30am to 2pm on Day Two.

Fresh Produce India 2017 was sponsored by some of the leading names in the local and international trade, including VLAM, Fruit South Africa, Fruit Logistica, HortiTechIndia, IG International, Suri Agro Fresh, NGK Trading, the US Apple Export Council, FROM and the Washington Apple Commission.