California to act as the hub for kiwifruit marketer’s growing presence in North, Central and South America 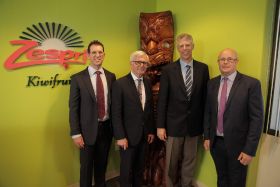 Zespri has opened a new regional office in North America, as it looks to capitalise on growing awareness for its SunGold offering and the kiwifruit category as a whole.

Located in Orange County, California, the office will also serve as the hub for the kiwifruit marketer’s activities in Central and South America, with around 10 staff to initially be based at the site.

Kiwifruit remains an underdeveloped category in the US, ranking number 21 in the overall fruit bowl, according to Zespri. Conversely, the fruit ranks in the top 10 in most European and Asian countries.

Zespri has achieved some cut-through with SunGold in North America over recent times, with sales volumes growing by over 100 per cent over the past two years. The value of the trade is projected to hit nearly US$50m in 2018/19.

“The New Zealand kiwifruit industry is on track to more than double sales to NZ$4.5bn by 2025 and an important part of this growth will come from developing markets like North America, as well growing sales in our more established markets,” explained Zespri chief executive Lain Jager at the office’s official opening today (28 July). “Zespri is re-launching the kiwifruit category in the United States and the wider Americas region to attract new consumers and grow sales.”

“By appointing market development managers, we’ve been able to work with key retailers to build meaningful programmes to expand our distribution across the country and return more value to our retail partners and New Zealand growers,” Jager added.

A Maori cultural delegation officially opened the new office at a ceremony attended by senior Zespri executives and the Mayor of Newport Beach, Kevin Muldoon. A whakairo/carving commissioned for the office was unveiled at the opening.