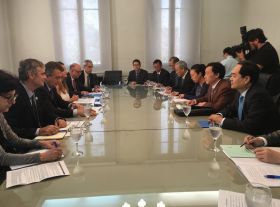 The Argentine Blueberry Committee has greeted the official opening of the Chinese market for fresh blueberries from Argentina after five years of negotiations as a huge opportunity for the sector.

The import protocol was signed at the end of December during an official visit to China by Argentina’s Minister for Agro-industry Luis Miguel Etchevehere, at which a deal to approve imports of dried peas was also agreed.

“These agreements confirm our intention to become the supermarket to the world by opening new markets in order to fuel the growth of our regional economies,” Etchevehere said.

During his visit, the minister held a meeting with Chinese plant health authority AQSIQ to review the extensive agenda of talks on securing access to China for a range of Argentine products, including cherries, wheat and beef.

Federico Bayá, president of the ABC, said the deal represented “a major opportunity and a major challenge”.

“The former because it opens up such a big market with huge appetite for fresh blueberries and the later because it means we must adapt our logistics set-up so that we can supply the market competitively with a top quality product that arrives in the best condition,” Bayá told Fruitnet.

Bayá said the committee’s primary objective would now be to work towards the reduction and eventual elimination of import tariffs so that Argentina can compete with other Southern Hemisphere suppliers. At present Argentine blueberries are subject to a 30 per cent tariff, while Chile and Peru can access the market tariff free.

“We are convinced that the quality and taste of Argentine blueberries will be popular among Chinese consumers and must now redouble our efforts to develop this new market,” Bayá continued.

Chinese demand for blueberries is growing rapidly and the country has become a key target for producers such as Chile and Peru. With per capita consumption of just 3.7g (compared to 1.5kg in the US), there is huge potential to develop the market.