Demand for irradiation services is increasing in Australia, as key export markets accept it as a phytosanitary treatment 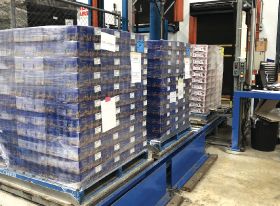 Palletised products travel over a conveyor belt to be treated

Regarded as simple and highly reliable, irradiation treatment is opening doors for Australian exporters in Asia.

Within the past 18 months, both Vietnam and Thailand have recognised irradiation as an accepted phytosanitary treatment for selected Australian fruit lines.

The irradiation treatment process takes about 45 minutes to complete and is a continuous flow of palletised product on a conveyor. It is conducted within the confines of a chilled room, meaning the consignment can be loaded for export immediately after treatment without any disruption to the cool chain.

Once treated, the fruit is free to travel to its destination by whichever means desired. It means airfreight is now a viable option for Australian exporters targeting discerning consumers with a preference for the freshest possible fruit.

Australian cherry and table grape suppliers are already sending fruit to Vietnam under this method, with demand for irradiation services from these two sectors exceeding expectations, according to Ben Reilly of Steritech, an Australian company specialising in irradiation treatment from a facility in Brisbane.

“We expected demand to peak at the start and end of the grape season, but over 2017/18 the demand for airfreight treatments was season-long,” Reilly said. “Importers are excited to receive early shipments of the freshest grape variety being harvested. For cherries there really is no other viable option for airfreight.”

Australia and Thailand announced a new irradiation pathway for horticultural exports in September. Australian persimmons and Thai mangoes were the first products to be ticked off for approval under the irradiation plan.

Reilly can also see doors opening for irradiated Australian fruit in other markets across Asia and around the world.

“The treatment is highly reliable with fewer variables that can impact efficacy, which is increasingly important to regulators,” he said. “It’s a unique combination of commercial, technical and environmental benefits that are driving the growth.”

Such is the promise irradiation shows for Australian exporters, Steritech is developing a second facility in Melbourne, which is on track to be open for exports over the 2019/20 Australian summer. Melbourne is located closer to the country’s major cherry and grape production regions than Steritech’s Brisbane facility, which was initially built to handle Australia’s tropical crops.

“With the Melbourne facility, Australian grapes and cherries should be capable of arriving in markets like Vietnam and Thailand within 48 to 72 hours of being picked,” Reilly explained. “This would provide a tremendous advantage for Australian producers competing in a global market.”

Read more about market access gains being made by Australian exporters with irradiation in the December 2018/January 2019 edition of Asiafruit Magazine, out now.