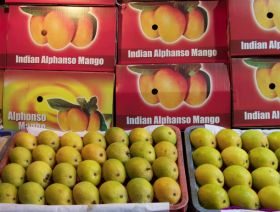 Phytosanitary inspectors from Korea and Malaysia are expected to visit India at the start of the mango season to foster a smoother export pathway for Alphonso mangoes.

Currently, Korea requires vapour heat treatment for the fruit and Malaysia requires it be irradiated.

The Indian Express reported senior officers of the Maharashtra Agricultural Marketing Board said talks were in place with aims to facilitate exports ahead of the 2019 season. The board also currently runs irradiation and hot water treatment plants to enable export of other varieties.

India’s mango season typically begins in March and ends in June. Last year, India exported mangoes to Australia and Japan beyond its traditional markets in the Middle East and Europe.

This year, there will be more mangoes to move, with an expected 10-15 per cent increase in export volumes. Production looks set to rebound this year, after the crop fell by 25-30 per cent in 2018 due to unseasonal rain.

India can ship other mango varieties to Korea more readily under the protocol as cultivars like Kesar hold up better to vapour heat treatment.

Last year Kay Bee Exports CEO Kaushal Khakhar said exports were only constrained by the need to channel all fruit through a government-accredited facility.