As part of a plan to expand overseas services, Korean Air will expand its services, bringing more fresh produce from the Americas 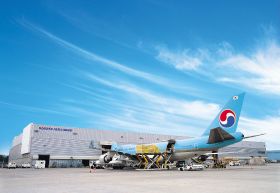 Korean Air Cargo, the cargo division of Korea Air, has announced a number of changes to its offerings, increasing international services while reducing domestic services.

According to an Air Cargo News report, the airline will add an additional weekly frequency to its Americas service.

The cargo returning from the Americas is expected to mostly consist of fresh produce including cherries, asparagus, mangoes and blueberries, while outbound cargo will be mostly industrial products.

Korean Air Cargo said in its announcement that this expansion was part of a wider strategy to expand its overseas services.

This change was accompanied by the announcement of a planned change to domestic services. Starting 1 October Korean Air is set to halt cargo delivery services at the country’s three regional airports in Daegu, Cheongju and Gwangju.

Low cargo demand on these routes and a poor start to 2019 contributed to the decision.

“The three airports have continued to report losses in spite of diverse efforts to improve profitability in the cargo business. So, we decided to stop providing freight delivery services in the airports,” Korean Air told The Investor.