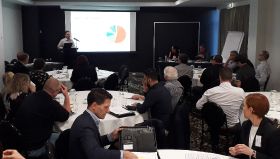 A wide-ranging programme covered some of the key issues facing the sector, including biosecurity, regulatory processes and improved market access.

The acceptance of irradiation as an approved phytosanitary treatment under serval new and renegotiated protocols is being viewed as a key driver for Australia’s export growth, particularly in Asia. Ben Reilly of Steritech, a company that has pioneered irradiation treatment in Australia, told the audience that his company has seen a substantial lift in the volume of fruit it handles across all categories over the past 12 months.

The demand has been so great that Steritech has now developed a second treatment centre on the outskirts of Melbourne. The new facility will provide better access to irradiation treatment for crops predominantly produced in south-east Australia, such as cherries and table grapes, while its proximity to Melbourne Airport (25km away) ensures a short transit time for airfreight.

The forum rounded out with a presentation from AHEIA chief executive Andréa Magiafoglou, who outlined the association’s key objectives for the year ahead. Magiafoglou said the forum remained an important date on the calendar for AHEIA members.

“The AHEIA AGM and Industry Forum are designed to connect members, update industry on the state of the global market and hear directly from Australian Government representatives involved in horticulture trade,” Magiafoglou explained. “This year attracted over 50 stakeholders, and speakers covered a variety of topics spanning global trade data, and regulatory processes in horticulture trade.”