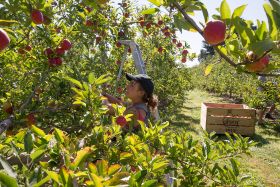 Speaking with Rural News Group New Zealand, Pollard said despite the sluggish start, the signs were encouraging, and he was predicting a reasonable year, but not a great year.

According to the report, apple harvest in Gisborne is complete, with Hawkes Bay expected be finished in the coming fortnight, and Nelson and Central Otago following from there.

News of a slow start to exports follows T&G's decision to charter a specialised shipment to ensure its apples would reach European markets ahead of any further coronavirus lockdowns.

At the beginning of the season, Pollard told Fruitnet he anticipated another labour shortage would be declared (Asiafruit, March 2020).

He told Rural News the sector was fortunate that, before the borders closed, a significant number of the RSE overseas workers had arrived in the country.

There are also reports indicating an influx of New Zealand locals seeking employment in the horticulture industry, with New Zealand’s kiwifruit industry a particular benefactor.

“We have been working frantically to get the fruit off the trees and the indications are that we have done a surprisingly good job. There is some wastage, but generally things have gone well,” he said.

“Given social distancing requirements, the capacity through the pack houses has been quite constrained and we have had to re-engineer pack houses to enable people to keep these distances.”

Pack house capacity is reportedly ranging from 50 per cent to 95 per cent across the key production regions.

Pollard highlighted the logistical challenges with shipping lines and schedules, as well as total port closures, as the reason why exports were slightly down.

Exports are expected to recover, however, with news that China, New Zealand’s second largest market, has reopened its ports and markets.

“It’s going well in China, but there has been a change in retail,” notes Pollard.

“Normally, we rely very heavily on ‘wet markets’ and significant numbers of these are closed – so there is a move to online, which presents challenges.”

This sentiment was shared with Asiafruit early on in the season, with T&G's head of corporate affairs, Adrienne Sharp, suggesting online sales would play an important role this year.

Pollard also noted issues with exports to India, Vietnam and Taiwan due to Covid-19.