A new partnership is planning to develop a 1,000ha dragon fruit farm in Cambodia to service both domestic and export markets 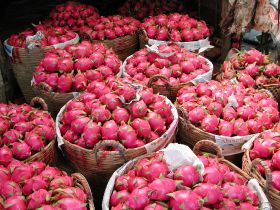 One of Cambodia’s leading agricultural voices is heading the development of a new dragon fruit farm in Cambodia, aiming to replicate some of the success of Vietnam’s dragon fruit industry.

According to a report from the Khmer Times, Yang Saing Koma, agronomist and founder of the Cambodian Centre for Study and Development in Agriculture, is working with local partners on the 1,000ha farm.

Yang Saing Koma said the investment was driven by local and international demand for dragon fruit and 1m trees will be planted as part of the project.

Yang told the Khmer Times, that dragon fruit had great potential in the market, noting the success of Vietnam’s dragon fruit exports. The project would also benefit the community, he said.

Kim Chhe, an officer in charge of the project, told the Khmer Times that planting on the project is expected to begin in September 2020 and a processing facility will eventually be constructed to accompany the farm. Kim said there were also plans to grow the fruit organically.

“I think people will prefer organic rather than chemically-treated fruit although the price is different. We also have considered exporting the fruit to Vietnam and China,” Kim said.