Growth in e-commerce, fresh fruit and wider retail sales has not prevented some of Vietnam’s retailers from considering their positions 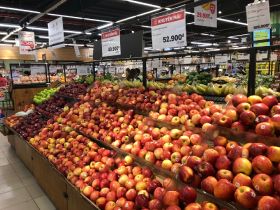 Vietnam’s retail sector is still dominated by small traditional retailers but sector-wide growth is quickly changing the landscape for modern retailers and e-commerce.

According to a USDA report, total 2019 food and beverage retail sales were estimated at US$51bn, a 13 per cent increase over the previous year, with fresh fruit coming in as the third-largest growth category.

However, this growth has been tempered by the Covid-19 pandemic with some studies showing a reduction in foot traffic of about 80 per cent in Ho Chi Minh City and Hanoi.

This has created an opportunity for e-commerce players such as including Tiki, Shopee, Lazada, Sendo, Foody, and Postmart, which all reported operating at full capacity and expanding their product ranges to capture growing demand during Vietnam’s lockdown.

To compete, the report said modern retailers have expanded their own online shopping platforms allowing consumers to have products including fresh produce delivered.

The disruption of 2020 follows an eventful 2019 for modern retailers. BRG Group, Aeon, and Bach Hoa Xanh all expanded their distribution networks in both major and lower-tier cities.

Meanwhile, there was also movement out of the competitive sector with Singaporean-invested Shop&Go and French-invested Auchan both departing.

The most significant move was Vingroup’s departure; it sold all of its retail outlets, including the likes of VinMart, to Masan Group.

When it comes to fresh produce, the report detailed fierce competition between imported and domestic consumer-oriented products.

Vietnam’s growing agricultural production contributed to a 13 per cent drop in Vietnam’s consumer-oriented product imports in 2019. China was the only country able to increase its exports to Vietnam in the category.

Despite this, fresh fruit still remains Vietnam’s largest consumer-oriented import. In 2019 Vietnam imported US$2.4bn of fresh fruit, representing a 20 per cent share of the category.