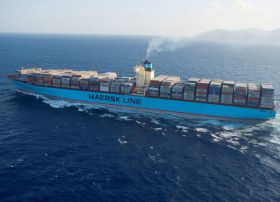 Maersk Line has announced the extension of its Far East-west Africa FEW1 service to incorporate new calls at Shanghai and Ningbo in China, a move designed to ensure a reliable and competitive product.

The new service offers customers a direct service from east China to Lome in Togo, Contonou in Benin and Pointe Noire in Congo, providing one of the fastest transit times in the market, the group said.

Improved transit times from Nansha, Hong Kong and Tanjung into west Africa will also be seen, Maersk Line said, along with improved reliability through the addition of an extra vessel.

The first call in Shanghai will be the Maersk Norwich, arriving on 11 March 2009.

Meanwhile, the group is making a number of alterations to another of its services, the Europe-Middle East & south Asia network.

The changes, which are again aimed at providing improved schedule reliability, mean new fast direct services from north Europe to Aqaba in Jordan and Bandar Abbas in Iran, improved transit times from Jebel Ali (UAE) to the Mediterranean, and further intra-Gulf trade opportunities between Nhava Sheva (India) and Jebel Ali.

"In today's challenging and highly competitive market, we believe it is essential to maintain focus on our customers and their business needs," said Nikolaj Levin, senior general manager of Maersk Line Europe-Middle East & south Asia services. "An example of our commitment is our revised Europe-Middle East and south Asia service network. We meet customers' demands and at the same time we are opening up for new business opportunities."