Melon shortage on the horizon 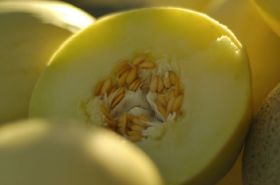 Suppliers are warning of a potential melon shortage around the end of April as Spanish growers continue with peppers due to recent shortages and high prices instead of switching to melon.

Several Almerian growers produce peppers and other salad crops during spring, before switching to melon for the Spanish melon season and continuing production.

Costa Rican suppliers are preparing to fill the gap but have faced a challenging season of their own and are not likely to produce sufficient volumes at the right quality, while growers in Brazil are standing by to begin sowing earlier than normal if needed.

Paul Lymer, UK salesman for Almeria grower Frucar Marketing, said: “The Almeria melon season will be running a bit late because of peppers and some of the other salad crops overrunning due to higher prices. Whereas they would usually rip out peppers to plant melons, growers have carried on with peppers for a bit longer.”

As a big pepper producer, Lymer said Frucar would normally carry on until the third week of May, so the company’s melon window will be the same as usual. But he added: “There could be a shortage at the back end of April-early May.”

Managing director of UK importer Vidafresh, Terry Watts, said there will “certainly” be a shortage of Spanish melons.

“According to our information there will not be a delay to the start of the Spanish melon season but there will certainly be a shortage of Almerian melons due to some growers delaying the planting of melons in favour of peppers and other crops,” he said.

“When faced with situations like this we would normally look to extend our Central American season.

“However, not only has it been a season of very mixed quality following the serious impact on planting caused by hurricane Otto in November, there have been ongoing long delays with the departure of vessels due to heavy congestion in the ports of Moin and Limon, which has simply compounded a very difficult and challenging season.”

Ocksan Aju, of Costa Rican grower Melopen, said the company decided to extend its production season by two extra weeks to take advantage of the expected shortage in Spain. “But in the end we've only managed to produce 20-25 per cent of or normal volume during those two weeks,” he said. “We think we'll manage to extend our production window to week 16, but climatic conditions have brought harvests forward so we're not sure we'll be able to reach week 16.

“We're also experiencing a few quality problems in melons with pepper spots and skin blemishes. At this stage our European clients are telling us that prices are good, especially for watermelons, and we hope this situation is maintained in the coming weeks and that the climate in Europe improves."

Brazilian grower Luiz Roberto Barcelos, of Agricola Famosa, said: “We don't start harvesting until the beginning of June and up to now we haven't received requests from our European clients for increased volume.

“However, if this does prove to be the case we may start sowing two weeks earlier than usual to take advantage of the situation. Brazil has had a couple of really tough seasons in Europe, but right now prices are high because there's not much supply coming out of Central America or Brazil."