Dutch microgreens specialist to train members of Craft Guild of Chefs in how to use leaves as ingredient, not just a garnish 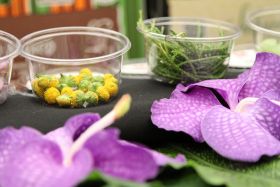 Dutch grower Koppert Cress has begun working with Britain's Craft Guild of Chefs to train its wide-ranging members in the versatility of microgreens.

The chefs’ association, whose members come from all sectors of foodservice and hospitality, work in positions ranging from trainee to top management. And one of the guild’s main objectives is to boost standards in professional cooking through education and training.

As such, it has joined forces with Koppert Cress to teach chefs about the versatility of microgreens and cresses, and how they can be used to enhance a menu.

The Dutch producer is, above all, keen to see microgreens used as an ingredient in a dish rather than simply a garnish, and wants educate chefs in the difference between microgreens and pre-cut cresses.

Microgreens, which are typically harvested after just one to two weeks, are the baby version of a mature vegetable. They are sold as living plants in biodegradable cellulose and tend to have more nutritional value than pre-cut cresses, whose nutrient levels diminish once harvested.

David Mulcahy, vice president of The Craft Guild of Chefs and food development and innovation director at catering supplier Sodexo UK and Ireland, welcomed the collaboration.

“Ongoing education for professional chefs is imperative, and menu development can be enhanced by innovative food pairings and cress being used as an ingredient as opposed to just a garnish,” he said.

“This is great news all round and I look forward to adding value to chefs’ knowledge in microgreens and cresses with Koppert.”

Koppert Cress has identified a knowledge gap in this area, which it is already trying to bridge through its ‘Cressperience’ taster days, showcasing the Koppert Cress educational programme.

These training days highlight the benefits of using and eating microgreens, as well as teaching chefs about their flavour profiles and possible food pairings, and providing recipe suggestions.

“We will offer every Craft Guild member an educational brochure explaining, in great depth, the difference between microgreens and cress. This document achieves a combination of theory and practical understanding and food pairing combinations.”

Hard copies and an electronic version of the microgreens manual are now available in the UK, the Middle East and the UAE. For more information, contact Paul Da-Costa-Greaves at paul@koppertcress.com.