Eureka throws its weight around

Breeder releases a photo of 16g blueberry, prompting it to consider its own world record bid 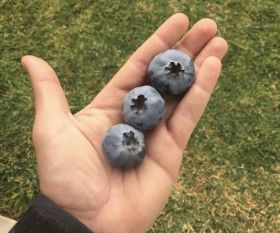 A new challenger has emerged in the race to produce the world’s heaviest blueberry.

Mountain Blue, the breeder of the Eureka-brand blueberry varieties, said its partner in Peru and Mexico, Family Tree Farms, had grown 16g individual berries in both countries. A photo sent to Asiafruit by Mountain Blue appears to validate this claim. 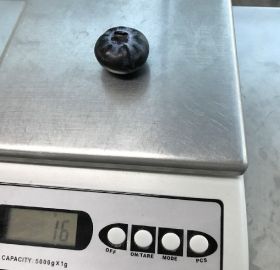 Mountain Blue managing director Andrew Bell said 16g Eureka berries were harvested in Mexico in 2016 and Peru in 2017. This would surpass the current Guinness World Record for the heaviest blueberry, which was set by an OZblu berry weighing in at 12.39g.

Bell said Mountain Blue is now on the lookout for a 17g berry to push the bar even higher.

“We regularly see Eureka blueberries in excess of 12g – grown well it is a jumbo berry,” he explained.

Bell added that Mountain Blue may well mount their own case for the official title of world record holder.

“We weren’t going to bother [applying for the Guinness World Record], however, we pride ourselves on having the biggest and best blueberries in the world, so ... we might just have to put a stake in the ground.”