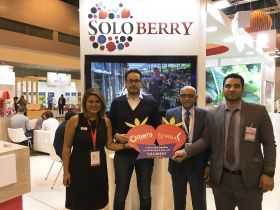 The new alliance was unveiled at Fruit Attraction in Madrid

Soloberry has established a strategic alliance with growers in Morocco and Egypt to bolster its strawberry supply capabilities in Europe and Asia.

Announcing the tie-up at Fruit Attraction in Madrid this week, Soloberry revealed it is now working with iBerry of Morocco and Egypt’s Korra Agri in a deal they described as a unique new collaboration between the North African nations.

The arrangement will see iBerry and Korra Agri supplying the European and Asian markets through the alliance, with Soloberry managing customer relationships and supply logistics. The deal sees Soloberry become the exclusive partner for Korra Agri in Europe, excluding the UK, and continue to be the exclusive partner for iBerry, whose entire strawberry, raspberry and blueberry production from north and south Morocco it already sells.

Representatives of the three sides met at Fruit Attraction to confirm the alliance, explaining that they wanted to build a stronger, consistent European business for the supply of their berries. The alliance kicks off in November with the start of the new season.

“Now is the most exciting time we have seen in a very long time in fresh produce,” said Soloberry’s group head of brand Rachel Montague-Ebbs. “All eyes are on the healthy food alternatives, the low-sugar, low-calorie, high nutritional gems that we all consume in different ways.

“This strategic alliance brings together two powerhouses of the production area for strawberries and we are extremely excited to be able to be the vehicle taking Moroccan and Egyptian strawberries on this world journey.”

Korra Agri was established in 2001, exporting grapes to Britain and Europe, and added exports of strawberries and peaches to its roster in 2005. iBerry, meanwhile, was set up five years ago as a co-operative of six strawberry growers. Now the business has a joint venture with Soloberry, which owns a 23 per cent stake in the company. They produce fresh and frozen strawberries, as well as raspberries and blueberries.

Speaking at the launch in Madrid, Soloberry’s head of procurement Jasmine Monteil described the tie-up as “such an exciting time for the business” as it seeks to fulfil supply in all key windows and strengthen its offer for customers. “Everyone was talking about Egypt and Morocco as rivals, and this is perhaps the first time these countries are working together like this,” she said. “People are always talking about the competition but we see it as a friendship.”

Mostafa Ibrahim, deputy director of Korra Agri, added that his business wanted to work with Soloberry for its reputation and “high integrity”.