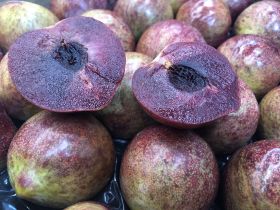 Lovita has a distinctive skin finish

Five French and Spanish producers have been chosen to grow and distribute the premium red-fleshed plum variety Lovita following its launch at Fruit Attraction and Fruit Logistica earlier this year.

The juicy late club variety, which has more than 20 Brix, will be grown by 30-40 producers in France, Spain and Portugal, with 50 hectares set to be planted by 2020. Its breeder, French Fruit Lovers, has exclusive marketing rights for the product across all three countries.

In France, four companies will be in charge of distribution – Boyer SAS, Apifood, Cancel Fruits and Le Vieux Pointet – while in Spain, Albice Fruits has been chosen as a partner.

The plum, which has a distinctive green and red skin finish and an “excellent sugar-acid ratio”, will be one of the last plum varieties on the market, with the first harvest taking place in the south west of France in early September this year.

Around 80 tonnes is forecast this season, with production set to increase to 3,000t within five years.

The result of 10 years of trials, Lovita originates from a variety of Israeli breeder Ben Dor and its name was inspired by its heart-like shape and deep red flesh.

With the variety chosen as one of the entries for the Fel’Innov innovation awards at this year’s Medfel trade show, development manager Sébastien Guy is confident it can establish itself in most European markets.

With a marketing campaign that spans from September to December, the variety will be sold as a premium plum to enjoy as a sweet snack or dessert, for example during Christmas celebrations.