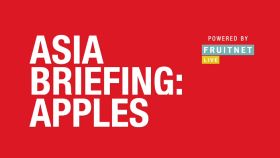 Wayne Prowse of Fresh Intelligence Consulting provided a statistical overview of the Asian apple market in 2019. Prowse said ASEAN markets had embraced imported apples bringing in 900,000 tonnes in 2019, while India led the way in Asia importing 250,000 tonnes in 2019, down 11 per cent from 2018.

Nicola Zanotelli is director of From, spoke about how From had been able to build its market share while competitors such as China and the US faced problems.

Zanotelli said From wanted to differentiate from other importers and explore the different tastes of Indian consumers.