FreshPro is trialing Myanmar avocados in the UK, thanks to an agreement with the country's exporter association 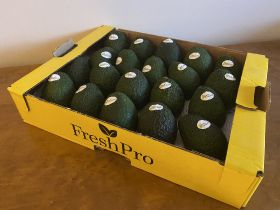 UK importer FreshPro Imports has established an exclusive agreement with Mavo, the Myanmar Avocado Producer and Exporter Association, and the British Chamber of Commerce in Myanmar to trial Myanmar avocados on the UK market.

“We have already received a small airfreight shipment and are currently assessing the consignment and have sampled one of the large UK avocado suppliers to the UK retailers and are awaiting full feedback of the initial trials," FreshPro's Chris Fagg told FPJ.

“First impressions of the avocado arrival are promising. We have also delivered samples to the Myanmar Embassy in London who were very keen to see the first arrivals from Myanmar into the UK."

The main season for Myanmar avocados is October though to February/March, but the country has different climates so supply would not be limited to this period, Fagg said.

"It is very early days, but growers are looking to gain the appropriate certificates to be able to export to the UK. We have pinpointed a couple of growers that have good packing sites that with a little input will be able to achieve correct accreditation for the UK/European marketplace. These are mainly in the state of Shan," Fagg said.

“There are more growers coming onboard, but first we have to do some trials to ensure that shelf life etc will be good. We think that the Amara variety has good prospects as it has a similar profile to the Hass in shape and sizing. There are also other varieties which we think may fit other windows in the import season," Fagg said.

FreshPro's agreement with Mavo came about thanks to the British Chamber of Commerce in Myanmar, who put the two in contact with one another, Fagg explained.

Mavo has over 3,000 members and Myanmar produced around 30,000 tonnes of avocado last year, of which around one-third was exported  around Asia, with the remainder kept for local consumption, Fagg said.