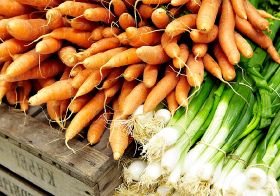 Researchers claim that consuming 5 A Day will add up to three extra years to a person's lifespan.

Scientists at the Karolinska Institute in Stockholm studied more than 70,000 middle-aged men and women. They found that early deaths, mostly from heart disease, were more common among non-vegetable eaters who had an average life span of 34 months shorter than that of vegetable-eaters. The adults who took part in the 13-year project were aged between 45 and 83.

With only one in three Britons currently consuming five portions of fruit and vegetables a day, Catherine Collins, principal dietitian at St George’s Hospital NHS Trust, London hopes that the research will help to convert more people to the Department of Health's 5 A DAY aspirational goal. She said: “If you eat the right amount of fruit and vegetables you seem to have a longer life.”